The world economy is in a synchronized deceleration and economic prospects are weakening. Global growth will slow to 2.9 % in 2019 and 3 % in 2020 (OECD), after 3.6 % in 2018 and 3.8 % in 2017. Thus, the world economy is still growing, yet at a very moderate rate. Among developed markets, economic activity has softened most substantially in the Eurozone, while the US economy continues to expand solidly. Emerging Asia remains the fastest growing world region. Economic growth is also slowing in China (2019: 6.1 %) and India (5.9 %), though. Emerging Europe (CEE) will outpace the Euro Area economy also in the years ahead (Figure 1).

The ongoing trade conflict between the United States and China is the principal factor undermining confidence, growth and job creation. The International Monetary Fund (IMF) estimates the cumulative effect of trade disputes to be -0.8 % of GDP by 2020. Global trade volume has stagnated in 2019 and even declined more recently (-0.9 %, y/y, July). Besides the direct effects on growth via lower export demand, the current state of the world economy is characterized by weak business sentiment and high uncertainty, negatively affecting business investment. Second round effects through a loss in confidence and adverse market reactions, clearly dominate the direct effects from trade disputes. The global purchasing manager index (PMI) has declined to 51.2 in September, the PMI for the manufacturing sector stands at 49.7 (values below 50 indicate a contraction). Manufacturing sentiment is weakest in the Eurozone (45.7), followed by the US (47.8) and China (49.8), see Figure 2. It is predominantly the manufacturing sector which weighs on growth while service sectors have rather prevented a more severe deterioration. Yet, persistent weakness in manufacturing sectors and unsolved trade disputes will ultimately weaken employment growth and spending.

Since around a year, fearmongers have been seeing the next US recession around the corner, being motivated by the inversion of the US yield curve (Figure 3). Yet, until now the US economy has continued to expand solidly. Current indicators point at around 2 % growth of real GDP during Q3 2019. Some indicators start to signal a cooling. Monthly payroll growth slowed to 150.000 new jobs during the last six months after around 200.000 at the beginning of the year. Consistent with weak sentiment indicators, business fixed investment contracted during the second quarter, the first time since 2016. Further, leading indicators for the industrial sector signal the onset of a contraction in manufacturing. At one point in time, the prophecies of doom will become right.

Economic growth continues to moderate gradually and the development in coming quarters is heavily uncertain. In Q2, quarterly real GDP rose by 0.2 % (after 0.4 % during Q1) and our nowcasting model currently indicates zero-growth for Q3 2019. Uncertainty for growth in the next quarters is significantly higher than in past quarters amid weak sentiment and conflicting short-term trends. Household consumption drives growth (+0.2 % q/q and +1.2 % y/y). In addition, government consumption (+0.3 % q/q and +1,3 % y/y) and fixed investment (+0.6 % q/q and +2.8 % y/y) contribute to GDP growth, while net exports were flat in Q2 2019. Hence, investment kept expanding in spite of weakening business sentiment (PMI, ifo, EC). In annual terms, GDP increased by 1.2 % in Q2 and we forecast a growth rate of 1.1 % for the entire year and 0.8 % for 2020.

Private consumption remains healthy supported by positive labor market trends. Retail sales, a monthly indicator for consumption, rose by 2.2 % in July. The unemployment rate has been declining continuously (7.4 % in August), while dispersion among countries remains high. Labor force participation has been increasing (64.6 % among 15-64 years old). However, both growth in employment (+1.2 %) and hourly compensation (+1.2 % y/y in Q2) have been moderating and indicate a gradual cooling.

Industrial production rose by 2.3 % (y/y) in July, while excluding construction reveals a decline (-0.7 %). Business sentiment slowed accordingly (PMI, EC), while retail sales keep expanding slowly (+2.0 % between June and August). Still, consumers benefit from a healthy labor market. The unemployment rate remained very low (4.5 % in August, Eurostat seasonally-adjusted). Unemployment according to the national calculation is 2.8 % below last year’s level (September), however, the number of unemployed persons older than 50 years has already started to rise again (+2.2 % y/y, Figure 5). Total employment delivers a sign of cooling (+0.7 % y/y in September after +2.4 % in 2018).

Central- and Eastern Europe (CEE) continues to outpace Euro Area growth. Economic convergence continues. The manufacturing slump in Germany and prolonged uncertainty with weak business sentiment start to spill over to the small and open economies of the CEE region. It is unlikely that the region can fully decouple from the Euro Area business cycle, yet substantial improvements in labor markets have made CEE more resilient. We expect the region (ex Russia) to grow at 3.7 % in 2019 and 3.3. % in 2020 (Table 1).

The economic outlook in Central Europe (CE) remains favorable. GDP growth continues to be strongly supported by household consumption, while deteriorating external demand weighs on growth. In Hungary and Poland, the industrial sector continues to support GDP growth, which remains above 4 % (y/y). In Slovakia and the Czech Republic growth rates are lower, as the industrial sector has moderated more extensively. Strong labor markets support the continued expansion in CE, yet, further improvements will be limited. Inflationary pressure has been rising lately, the external environment will however prevent inflation to overshoot central bank inflation targets over the medium-term.

In Russia, short-term growth picked up, yet the economy is set to continue a moderate though stable development. Ukraine’s recovery remains solid amid rising domestic demand and construction. Lower inflation, absence of external shocks and international investors’ search for yield lead to lower interest rates both in Russia and Ukraine. The Romanian economy surprised to the upside during the first half of the year, as growth rates exceeded 4 % (y/y). A strong construction sector and solid growth in services compensated for a decline in industry.

The economies of Southeastern Europe (SEE) reflect a stable macroeconomic environment. Growth rates range around 3 % annually, labor markets have further improved and inflation remains in check. Yet, given their comparatively low level of income, growth rates are rather moderate and unemployment rates are high in many countries of SEE. Structural barriers to boost growth become more evident when the external macroeconomic environment is less supportive. Deficiencies include high levels of emigration, unfavorable demographic trends, corruption, political instability, unsound public finances and a lack of skilled labor. This being said, within-region heterogeneity should not be overlooked.

In September the ECB has dashed any remaining hopes of monetary policy normalization by lowering the deposit rate to -0.5 % and announcing an open-ended QE program at a monthly pace of 20 billion Euro starting in November 2019. The QE program will end only shortly before the ECB starts increasing interest rates again. For the latter to happen, inflation would need to robustly convergence to 1.9 % over the ECB’s projection horizon and further be reflected in underlying inflation dynamics. At the moment, and in spite of the additional monetary stimulus, inflation is projected to reach 1.0 % in 2020 and 1.5 % in 2021. Thus, inflation clearly falls short of the ECB’s price stability objective and an attempt of monetary policy normalization seems unlikely over the next two years.

Since Fed President Powell has announced a mid-cycle adjustment, the federal funds rate has already been lowered twice. Fed projections from September indicate no further decrease, while financial markets expect the Fed to lower the federal funds rate to 1 % by the end of 2020. Trade policy uncertainty and muted inflationary pressure have been brought forward to justify lowering interest rates. PCE core inflation, the Fed’s preferred inflation gauge, was 1.8 % in August and is expected to gradually increase to 2 % by 2021. Weak business sentiment and investment activity pose downside risks for the Fed’s economic outlook, which could shift monetary policy closer to financial market expectations.

The central banks’ shift to loosen monetary conditions without providing a clear, date-dependent, guidance on monetary policy normalization has caused yields to decline substantially over recent months. Since the end of May, the German and US yield curves have lowered by 50 bps, particularly for longer maturities (Figure 6).

Overall, business cycles keep cooling around the globe. Yet, the process is gradual not disruptive so far. Signals are conflicting, but trends in sentiment, the industry and trade have been going south. Growth in the Euro Area is about to approach zero in the short-term, while the US economy maintains an expansion so far. At one point in time, the prophecies of doom – seeing the onset of a recession – might become right.

After a short period of normalization, the European Central Bank made a controversial U-turn in September. The growth outlook is characterized by downside risks and in an attempt to maintain its goal – price stability – in the medium-term, the ECB introduced fresh monetary policy stimulus. This could last for years.

Central and Eastern Europe’s business cycle has been very resilient for some time, however, first signs of negative spill-overs are emerging. Given its trade integration with Germany’s economy, the effect is likely strongest in Central Europe, although from a high base. Economic growth slows mostly across the region, convergence endures. Strong labor markets support domestic demand for the time being. 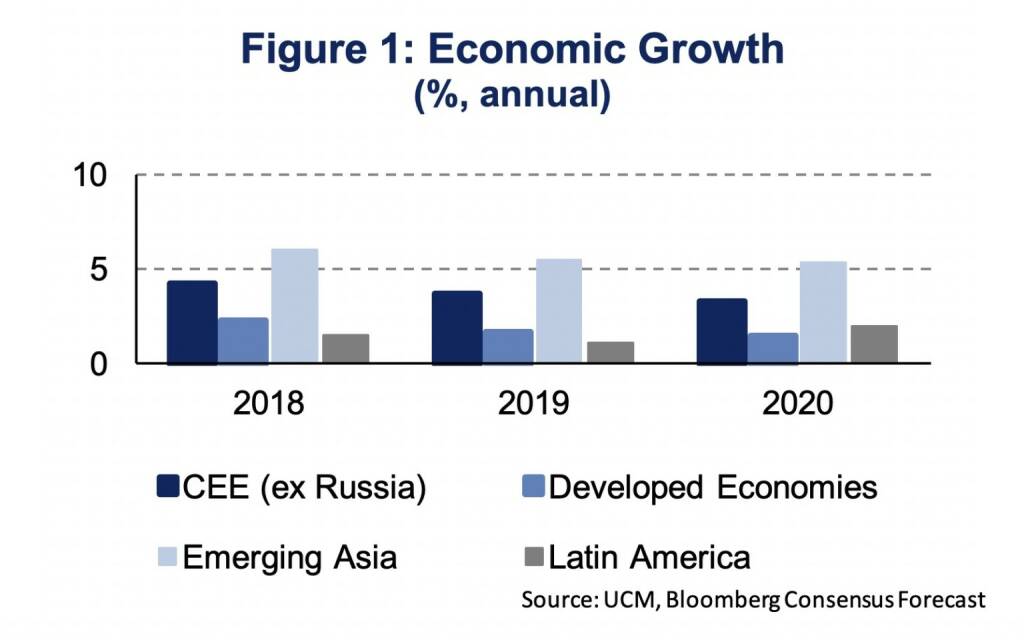 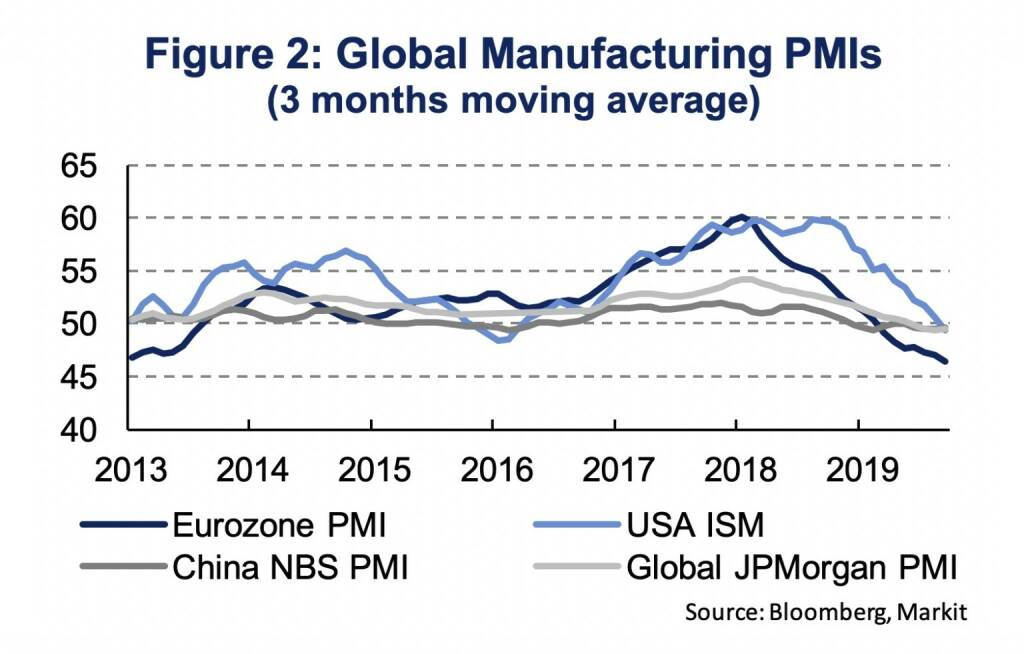 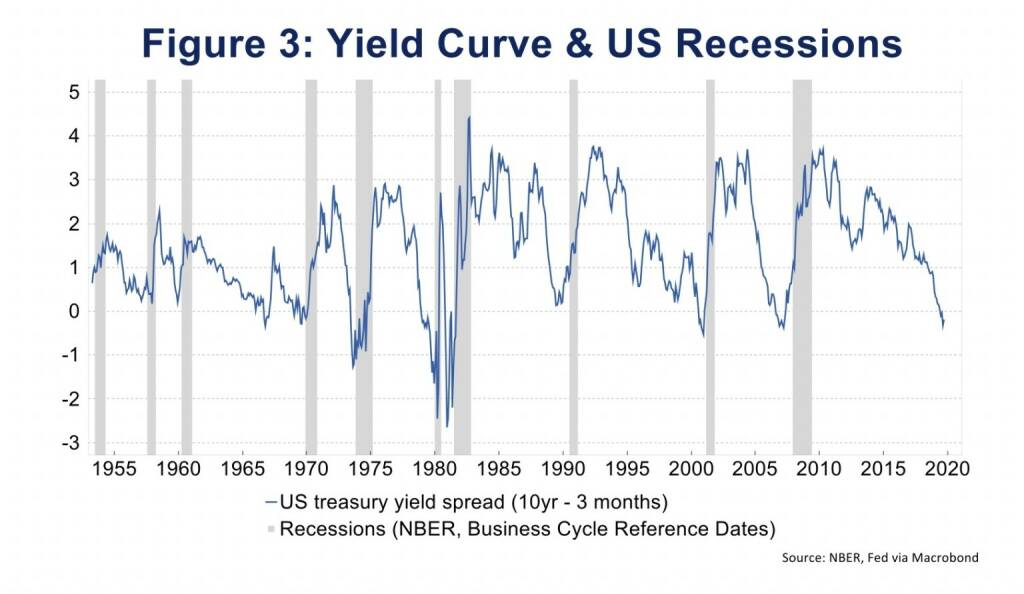 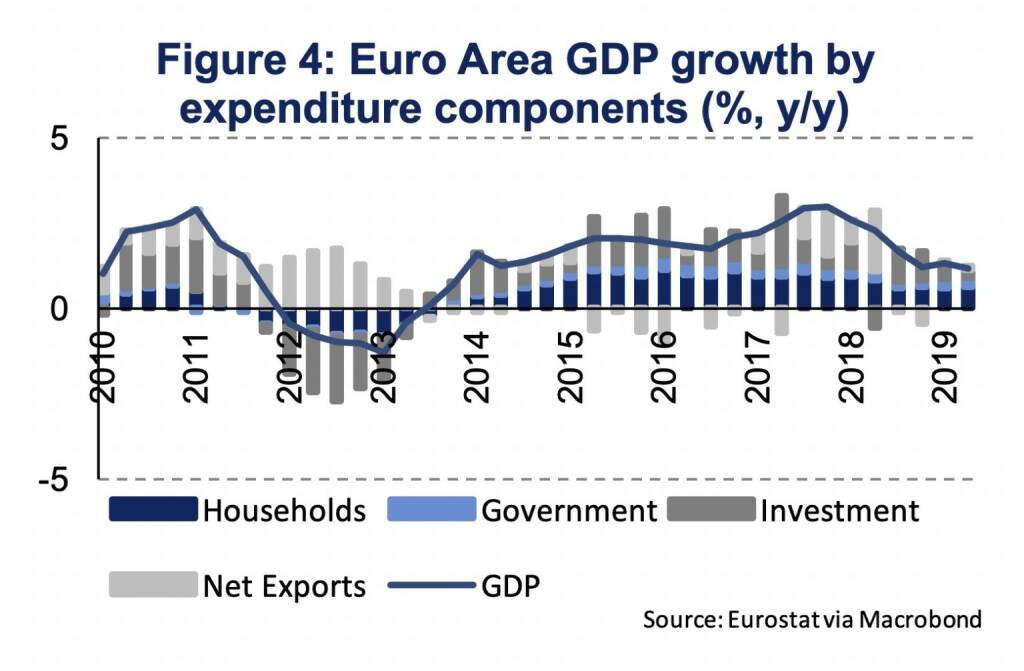 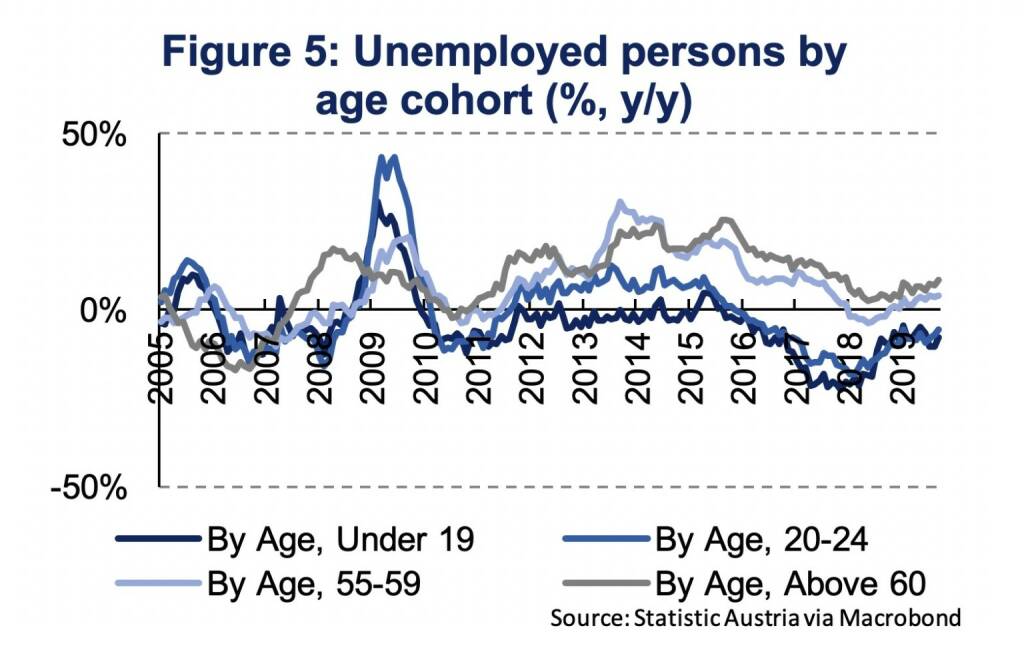 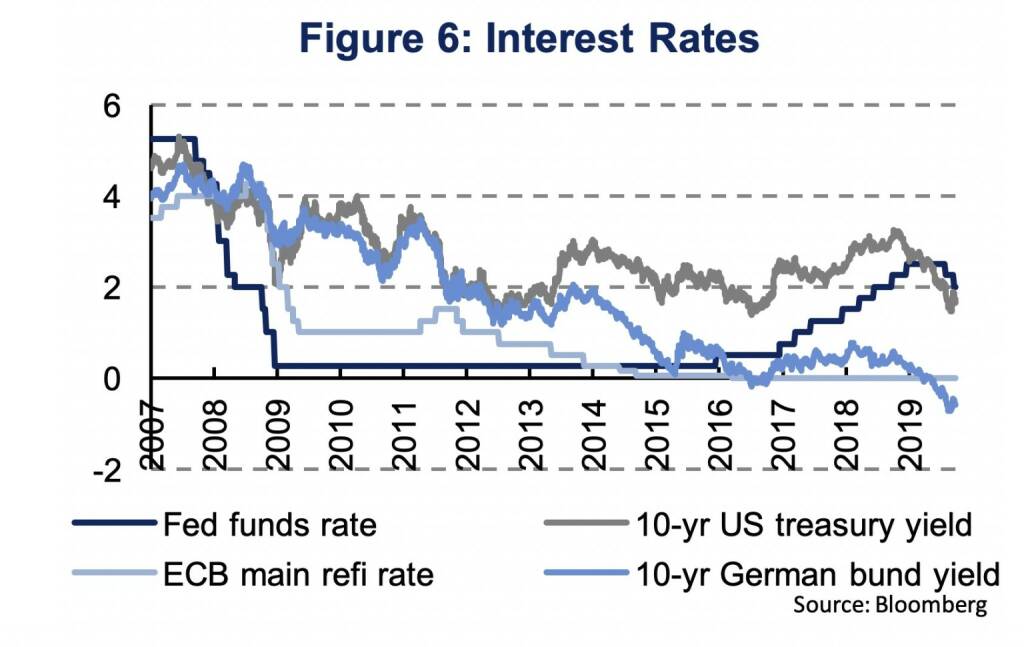