Large scale asset purchases (LSAP), or “quantitative easing” (QE), are intended to decrease long-term yields and ease financing conditions thereby stimulating aggregate demand and bring inflation back in line with the central bank’s price stability objective. The ECB launched the asset purchase programme (APP) in January 2015, which initially pledged the purchase of 60 billion EUR of securities each month. The asset purchases ended in December 2018 when the portfolio had reached around 2.6 trillion EUR.

In the wake of the APP the government bond free-float fell measurably. Comparable to the free-float of stocks – the publicly held part of company shares, the bond free-float is the share which is held outside central banks. The calculation of the free-float of German government bonds is an approximation which rests on several assumptions (Coeure, 2018; Arslanalp and Tsuda, 2012) [1]. Government bond holdings of foreign central banks and the Eurosystem under the public-sector purchase programme (PPSP) are subtracted from total outstanding general government bonds (central, state and local government bonds). World international reserves are from the IMF Currency Composition of Official Foreign Exchange Reserve database (IMF COFER). Claims in Euro assume that unallocated reserves are distributed similar to allocated reserves. From the Coordinated Portfolio Investment Survey (CPIS) country shares in the world Euro-denominated currency reserves can be inferred. The assumption is made that 80 % are government bonds. The decline of German general government (Bund) free-float is shown in Figure 1. Since the start of the ECB’s APP it has been falling below 20 % in our calculation.

Recent evidence suggest that the APP has compressed term premia significantly across maturities and flattened the yield curve (Eser et al., 2019) [3]. The APP is found to have reduced the 10-year term premium by 95 basis points. The new estimate is very much consistent with a consensus, that was built in past years about a QE-impact around 100 basis points. For example, it was mentioned in a speech by ECB’s Peter Praet on 6th April 2017 about “calibrating unconventional monetary policy”. It even complies with early evidence from asset purchases of the US Federal Reserve suggesting a QE-impact 40 basis points for one trillion USD asset purchases (Williams, 2014) [4]. Furthermore, these effects are persistent. The fading of the impact depends on the aging of the portfolio and the run-down of the portfolio that investors anticipate following the reinvestment phase. The length of the reinvestment period itself impacts term premia. The longer the reinvestment horizon the larger is the term premium impact.

The detailed results from Eser et al. (2019) are useful for quantifying the effects of additional rounds of asset purchases. The June macroeconomic projections of the ECB staff forecast real GDP growth of 1.2 % in 2019 and 1.4 % in 2020 and 2021. Inflation was projected at 1.3 %, 1.4 % and 1.6 for 2019-2021. Furthermore, the ECB staff provides ranges around the central projections for GDP and inflation. Figure 2 shows the central inflation projections as well as lower and upper bounds.

At the lower bound, year-over-year inflation would fall to 0.7 % on average (from 1.4 % in the central scenario) between H2 2019 and 2021. Accordingly, the lower bound for GDP growth implies average quarterly growth of 0.1 % (q/q); compared to 0.3 % in the central scenario. We assume that the lower bound represents a realistic downside risk scenario. Quarterly GDP growth slowed to 0.2 % in Q2 2019 and our real-time estimate for Q3 currently signals a further slowdown to 0.1 %. The inflation rate would fall short by 0.7 %-age points on average until 2021 (vis-à-vis the central projection), in turn, increasing the real Euro Area interest rates (adjusted for expected inflation) by an equivalent size. We can now make use of the above estimates for QE term premium effects to sketch monetary policy options. The 5-year and 10-year term premia decreased by 27 and 37 basis points (on average 32 basis points) per each trillion of asset purchases. To keep the real interest rate at the level of the central projection, in turn, a reduction by 70 basis points of the term premium would be required. Hence, it would imply additional asset purchases amounting to 2.2 trillion. Table 1 summarizes the arithmetic and adds an additional scenario (“cooling”) for which we assume a growth slowdown half as severe as the lower bound scenario.

Additional purchases of 2.2 trillion EUR could be done by buying 60 billion EUR per month for about three years. The “cooling”-scenario assumes a less severe shortfall in inflation compared to the central projection (0.3 %-age points) and implies asset purchases (AP) totaling 945 billion EUR (or 60 billion per months over around 1 ½ years). Probably, a decline of inflation to 0.7 % for around 2 years appears large making the “cooling” scenario more realistic. On the other side, a strong monetary policy response would be needed to bring inflation near the ECBs target (below but close to 2 %). The announcement of further monetary easing and additional QE” has been anticipated by investors for some time and would likely include a reduction in the deposit rate and forward guidance (anticipating that interest rates stay low for a considerable period of time). While we spot some light on the duration risk channel of QE to compress interest rates, nothing has been said about the transmission of additional monetary policy measures to the real economy and inflation. We also do not treat the sufficient supply of government bonds given the free-float has become very small. While yields keep falling in market anticipation of new unconventional measures, skepticism has been growing about positive effects on the real economy. 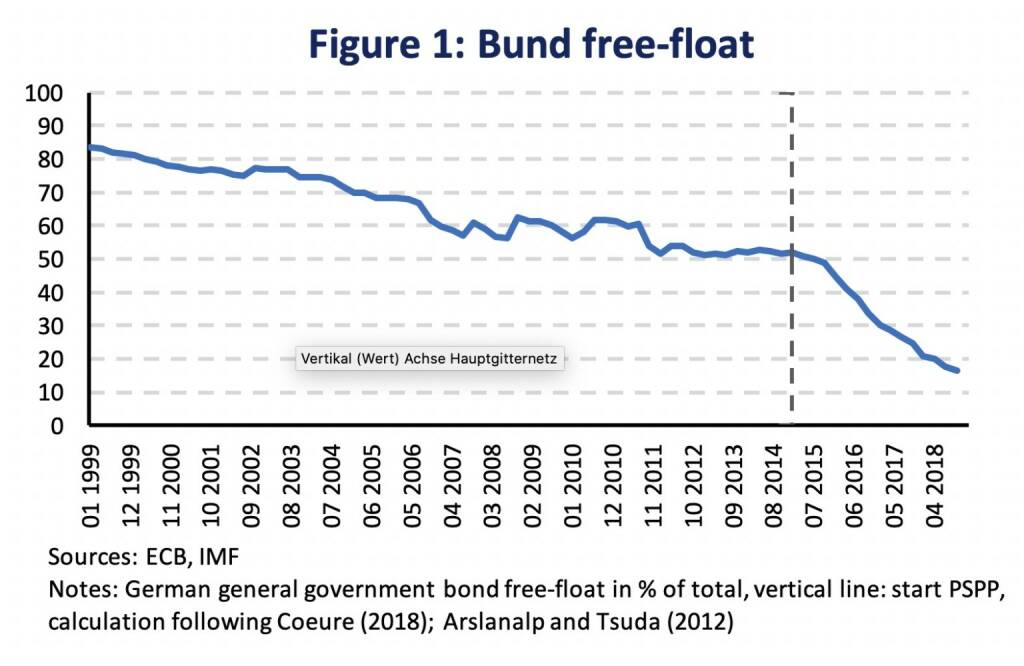 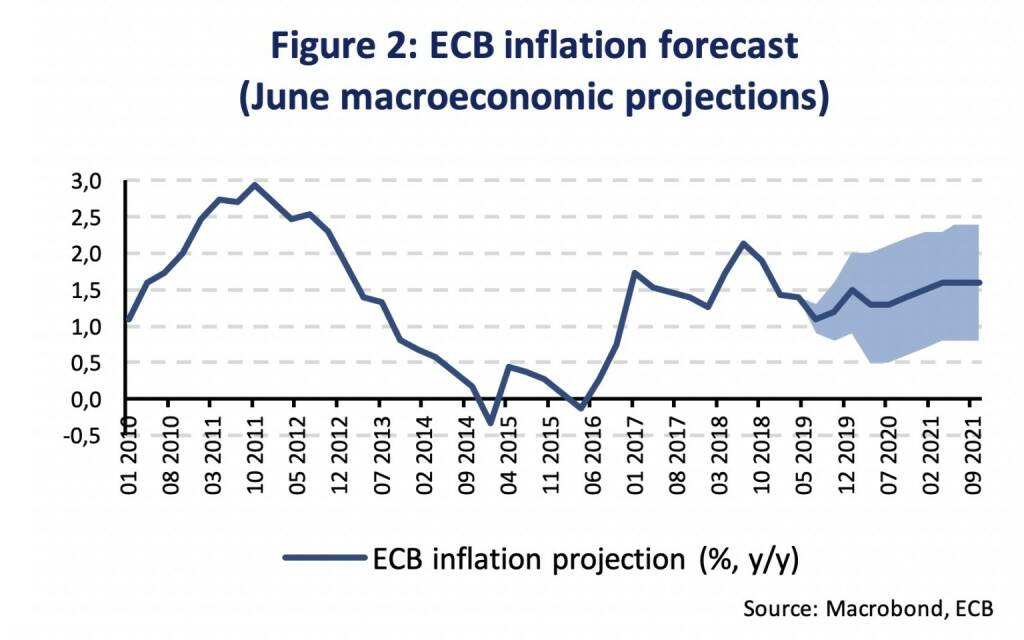