Economic growth momentum in Central Europe (CE) remains well above the Euro Area (EA), yet uncertainty about CE’s resilience to the EA’s business cycle slowdown rises. Last week’s release of gross domestic product (GDP) for the second quarter (Q2 19) showed growth at 1.1 % in Hungary, 0.8 % in Poland, 0.6 % in the Czech Republic and 0.4 % in Slovakia (quarter-on-quarter, seasonally adjusted). The Euro Area economy expanded at 0.2 % (q/q, sa) during the same period. Compared to previous quarters growth momentum has weakened in Poland and Slovakia while remaining rather stable in the Czech Republic and Hungary. Figure 1 shows quarterly GDP growth rates since 2016 as moving averages over 3 quarters. The Czech Republic was the first country where growth rates started to decline, followed by Slovakia and Poland, while, so far, no clear moderation is visible in Hungary.

The region’s resilience to the Euro Area’s slowing business cycle rests on its focus on domestic demand. Private consumption and investment activity have compensated for the deteriorating external environment. Nevertheless, the small open economies of the CE region continue to be heavily integrated into Euro Area and global value chains, particularly through Germany. Thus, the longer the business cycle weakness continues, the more likely it is that growth weakens in CE through affecting domestic demand, particularly investment as we have shown earlier [1].

A potential indication of negative business cycle spillovers could be the most recent industrial production figures. In June industrial production declined in all CE-4 countries by more than 2 %, on a month-on-month seasonally adjusted basis (CZ: -2.8 %, HU: -2.7 %, PL: -2.0 %, SK: -2.3 %). The decline was most pronounced in the production of capital goods (-4.6 %, CE-4 average in June, m/m, sa), followed by intermediary goods (-2.5 %) and consumer goods (-0.5 %). As figure 2 shows, industrial production has deteriorated since the start of the year (3-month moving average, month-on-month growth rates). The business climate softened as leading sentiment indicators, like the Purchasing Manager Index (PMI) for the manufacturing sector, indicate. The index signals a contraction, index < 50, in the Czech Republic (43.1) and Poland (47.4), while signaling more favorable conditions in Hungary (51.3).

Spillovers are not confined to the industrial sector. Global financial markets have seen a substantial compression of yields on debt securities. The CE region has not been an exception. Yields on government bonds with maturities of 10 years have declined by 120 basis points (bp), on average in CE 4, since the end of April 2019 (Figure 3). Yields declined by 1.7 %-age points in Hungary (3.3 % to 1.6 %), 1.1 %-age points in Poland (2.9 % to 1.8 %) and the Czech Republic (1.9 % to 0.9 %) and 0.9 %-age points in Slovakia (0.5 % to -0.3 %). Financial markets are expecting substantial monetary easing by leading central banks (Fed & ECB), which drives down global yields. As a consequence, investors allocate more funds into emerging markets on their search for yield. This has also brought an end to monetary policy normalization in Central Europe, where increases in central bank interest rates have become more unlikely. Depending on the extent of and ECB stimulus package, CE central banks   might even have to follow suit and ease monetary policy. A recent sensitivity analysis by the Czech National Bank (CNB) shows the possibility of two rate cuts (-40 bp) in 2020, if the ECB eases monetary policy significantly (CNB Inflation Report III/2019).

Russia’s economy surprised with a pick-up in growth during the second quarter as real GDP rose by 0.9 % compared to the correspond quarter in 2018 (Figure 4). In Q1, annual GDP growth had slowed to 0.5 % after a surge by year-end 2018 (+2.7 %). In seasonally-adjusted terms, we calculate that GDP increased by 0.6 % compared to the previous quarter after stagnating in Q1. Despite the acceleration the overall picture is likely to remain muted.

Q2 GDP expenditure details are not yet released. In Q1, growth in household consumption had slowed (+1.6 % y/y) but remained the main contributor to growth. Additionally, net exports have been contributing to GDP growth (both imports and exports dropping in Q1 but imports more so), while fixed investment fell by 2.6 % in Q1 2019 (as well as inventories). The development during the last three quarters hints at considerable variability in the data and we suggested that the construction sector is a source of variation (Figure 5). Completed construction was exceptionally high in Q4 2018 (570 mln cbm) but returned to more normal levels in Q1 and Q2 2019 (105 and 225 mln cbm). The implementation period of major national projects was shifted to the second half of the year, and, hence, successful completion could fuel construction and GDP in H2 2019 and 2020. The developments are in line with our own GDP growth forecast for this year (1.0 %) and 2020 (1.5 %).

Consumer expenditure has been driven by rising wages and credit growth. However, real wage growth was slow during recent months (on average 2.3 % annually during April to June) and significantly lower than last year (7 %). In light of this, real retail sales exhibit a slower expansion (+1.4 % y/y in June after 2.8 % in 2018). The unemployment rate remains fairly low (4.4 % in June after 4.8 % last year) although job growth is virtually absent in Russia. On the other side, bank lending to households continued at a double-digit, elevated rate (+22.4 % y/y in July) thereby supporting consumer spending.

The inflation rate declined to 4.6 % in July after a temporary increase above 5 % earlier in the year. The price declines are broad-based across categories with food & beverage (5.5 %), non-food (3.6 %) and services prices (3.3 %) exhibiting lower price increases than in early 2019. Especially, the food & beverage component had contributed to price increases in 2019 likely related to the VAT increase (from 18 to 20 %). Survey inflation expectations indicate no significant tendencies that agents expect higher inflation. Against the background of weak economic activity (the CBR projects 1-1.5 % % GDP growth for 2019 in the June Monetary Policy Report) and lowering inflation, the Central Bank of Russia (CBR) cut the key interest rate in June and July by 25 basis points each time to 7.25 % and even indicated the possibility of further key rate reduction in one of the upcoming meetings. The CBR also expects that inflation will return to its 4 % target and that monetary policy will become neutral during 2020.

Among other factors, which include increased macroeconomic stability, monetary policy loosening has contributed to a significant decline in ruble yields (Figure 6). The reductions in the CBR key interest were in line with our outlook although – amid lower inflation – came with higher speed than assumed previously. We assume a longer-term, equilibrium real level of interest rates of around 4 % which is sustainable for the Russian economy, yet indications for an equilibrium rate are scarce for Russia. Based on our internal rating model, we project a stable medium-term development of the sovereign borrower credit position in spite of a low growth steady-state. 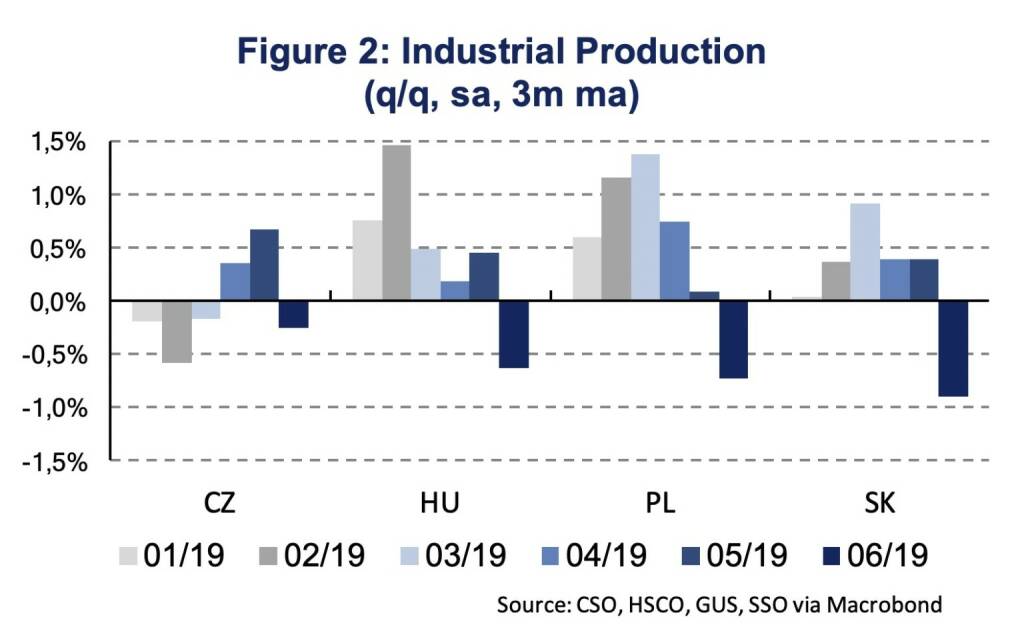 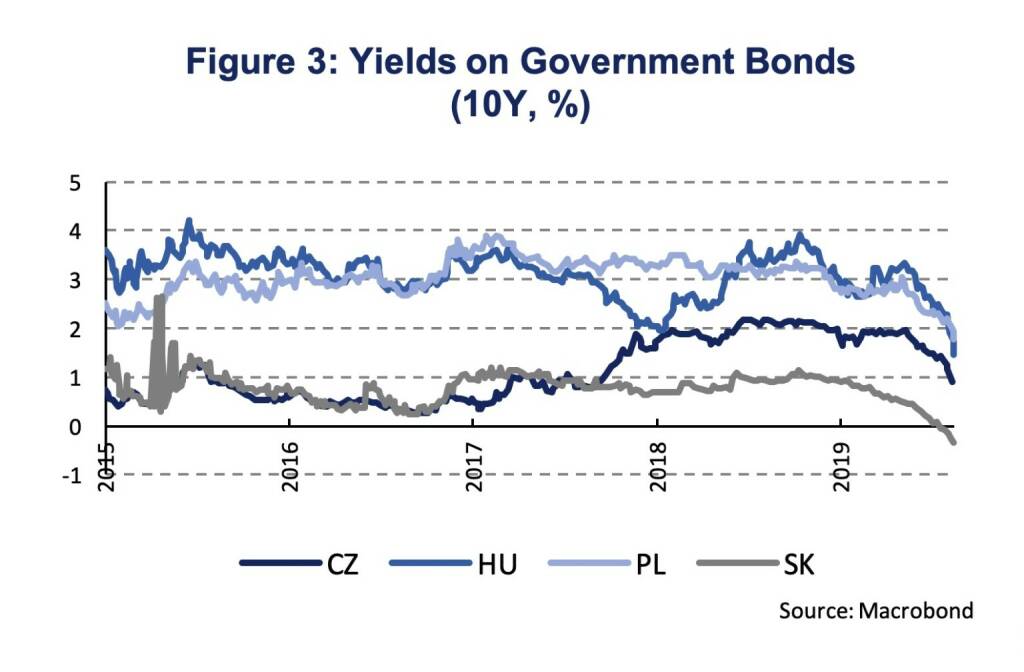 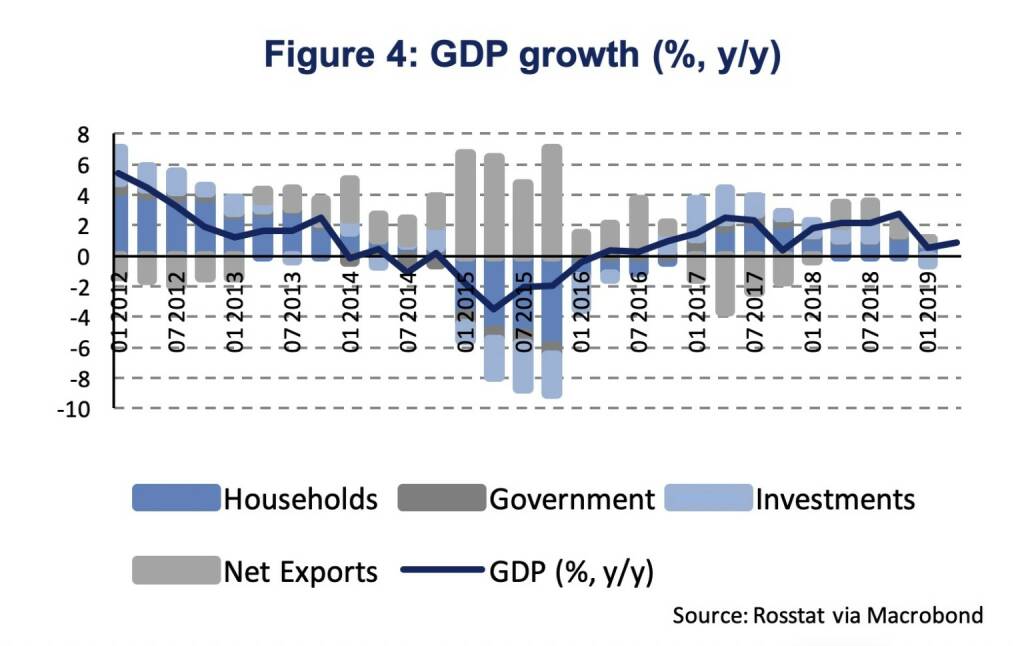 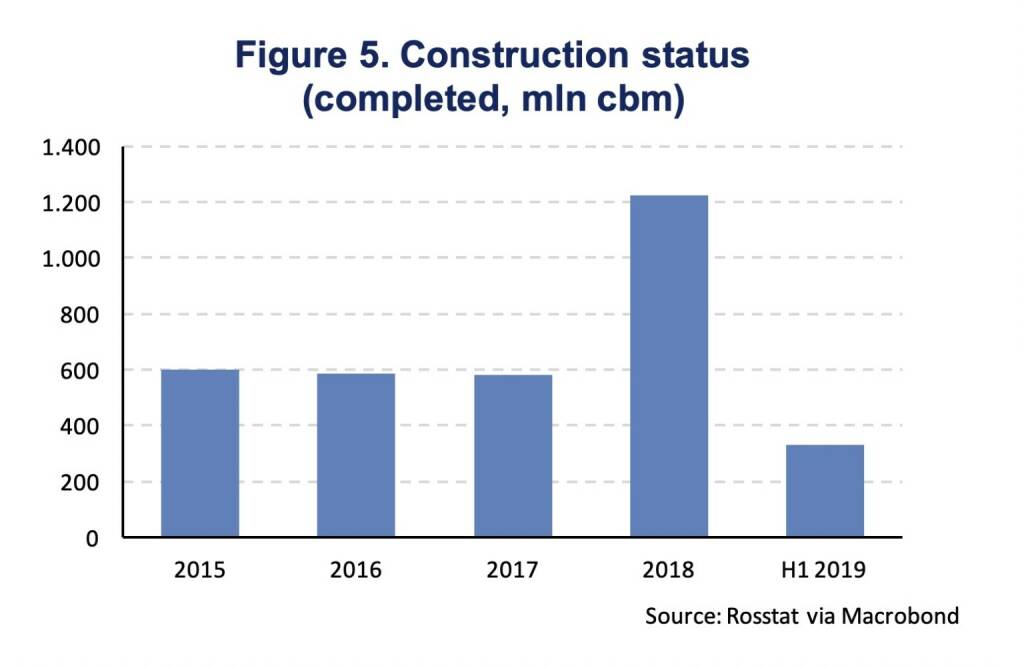 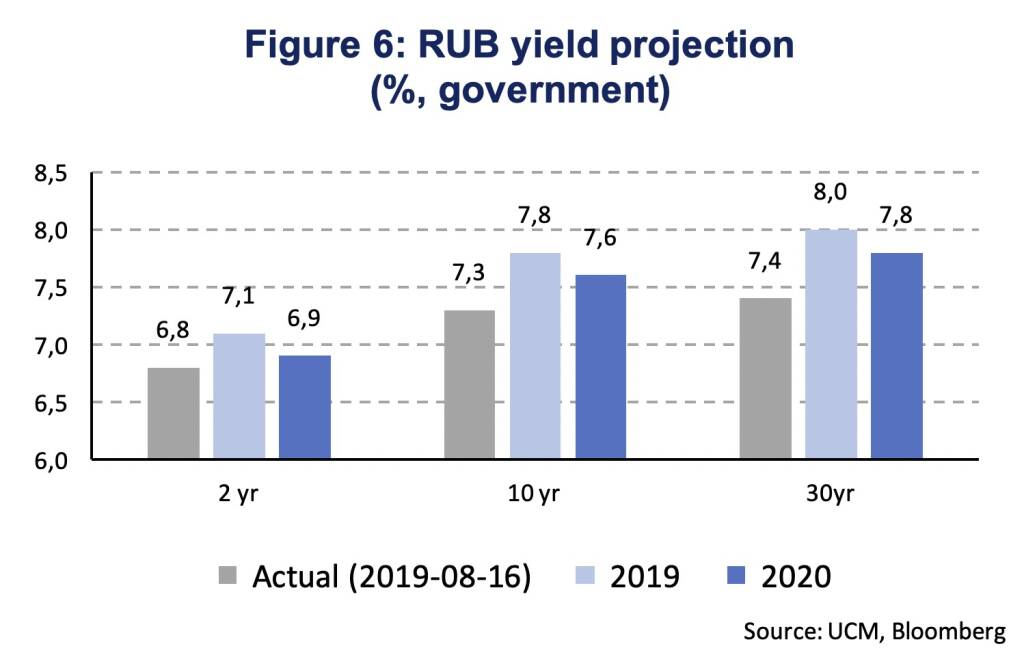