The European Central Bank (ECB) has stopped its monetary policy normalization and went into reverse before interest rates have even been raised once. Last week’s meeting has brought substantial changes to the central bank’s communication, strongly indicating additional easing measures to be introduced in September, the ECB’s next Governing Council meeting. A lowering of the deposit facility rate, currently at -0.4 %, alongside changes to the forward guidance on policy rates are likely and the launch of a new asset purchase program (QE) cannot be ruled out. The Governing Council has underlined “the need for a highly accommodative stance of monetary policy for a prolonged period of time”. The change of course responds to prolonged uncertainty in the economic outlook and inflation running persistently below the ECB’s inflation target alongside a recent deterioration of inflation expectations.

Among the many changes to the ECB’s communication was an adjustment to the forward guidance on policy rates. The Government Council added an easing bias opening the way for lowering interest rates in September. The ECB now expects “interest rates to remain at their present or lower levels at least through the first half of 2020”. The date dependency has already been altered twice after having been introduced in June 2018, when the Governing Council expected interest rates to remain at their present levels “at least through the summer of 2019”. In March 2019 the date dependency was then shifted to the end of the year and has further been postponed to the first half of 2020 in June. Financial market expectations of the path of short-term ECB interest rates have responded accordingly by postponing the date of a possible rate hike. Figure 1 shows expected future short-term rates as of January 2018, July 2018, December 2018 and July 2019 based on 1-month overnight index swap (OIS) forwards. Most recently financial markets expect ECB interest rates to remain at or below their present levels until 2024. In early 2018, it was believed that a similar level of interest rates will already be reached by mid-2019.

Consistent with expectations of low monetary policy interest rates, the Governing Council stressed the “need for a highly accommodative stance of monetary policy for a prolonged period of time”. Further, the ECB emphasized its determination to act “if the medium-term inflation outlook continues to fall short of its aim”. Most recent ECB projections (June) show Euro Area inflation at 1.3 % in 2019 and 1.6 % in 2021. A new set of ECB staff macroeconomic projections will be released in September. Until now, however, there is little evidence why the inflation outlook would have improved, as current readings seem to be in line with the most recent outlook. Headline inflation was 1.3 % in June, while core inflation, a better proxy for the underlying inflation trend, was 1.1 %. The ECB’s inflation aim is below but close to 2 % over the medium term, which “in a sense is 1.9 %” according the Mario Draghi. What was new in last week’s statement is the focus on symmetry. Symmetry means that there is no 2 % cap such that inflation can deviate on both sides. A short-term overshooting of inflation, therefore, does not require an immediate tightening of monetary policy.

Risks surrounding the Euro Area growth outlook remain tilted to the downside and a rebound in H2 2019, as previously anticipated by the ECB, has become more unlikely. Economic growth was surprisingly strong during the first quarter of the year, when the Euro Area economy expanded by 0.4 % (quarter-on-quarter, seasonally adjusted), yet, signs of a slowing expansion continue to weigh on the outlook. Our Nowcasting model, which predicts quarterly GDP growth based on high frequency business cycle indicators, indicates 0.2 % quarter-on-quarter growth in Q2 2019. Preliminary figures will be released on Wednesday (31.07).

In light of only moderate economic growth, projected medium-term inflation below the central bank’s aim and deteriorating long-term inflation expectations, the ECB has tasked its staff to examine options to provide additional monetary policy stimulus. The focus is laid on reinforcing the ECB’s forward guidance on policy rates, design mitigating measures for lowering the deposit rate and provide options for the size and composition of potential new net asset purchases. Details can be expected by September. 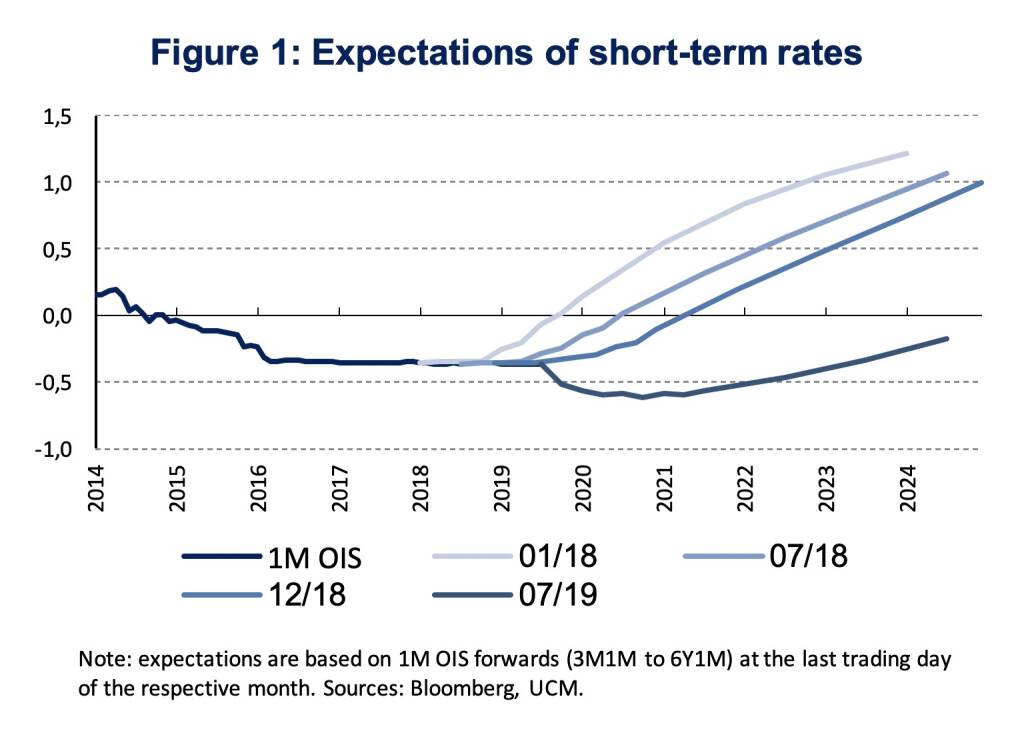 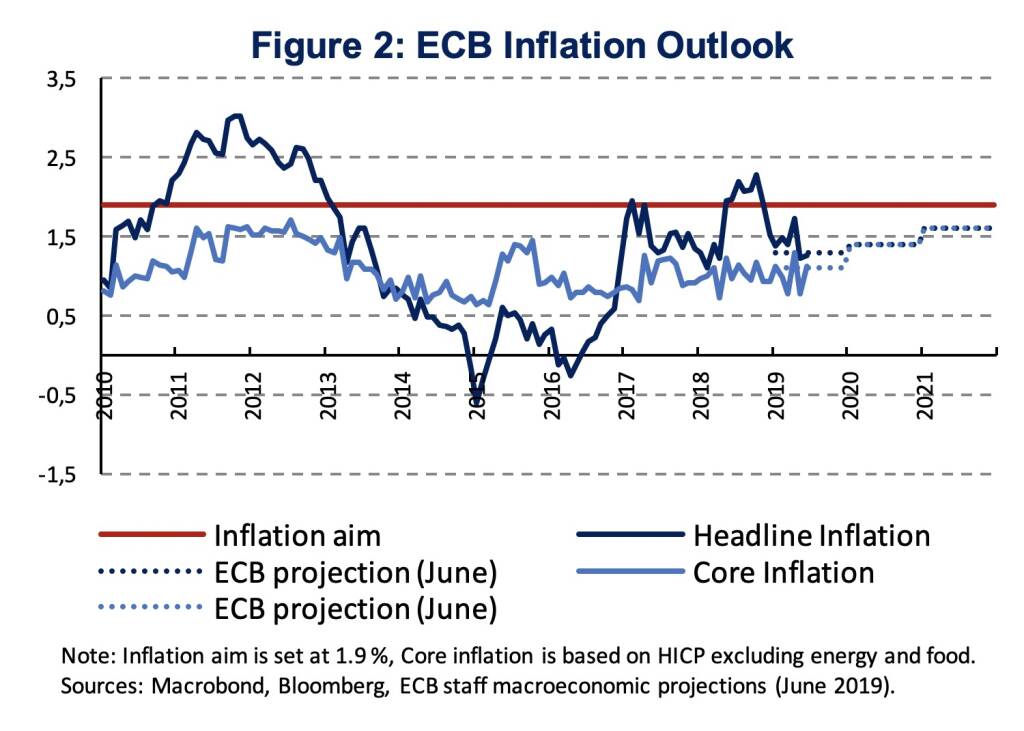 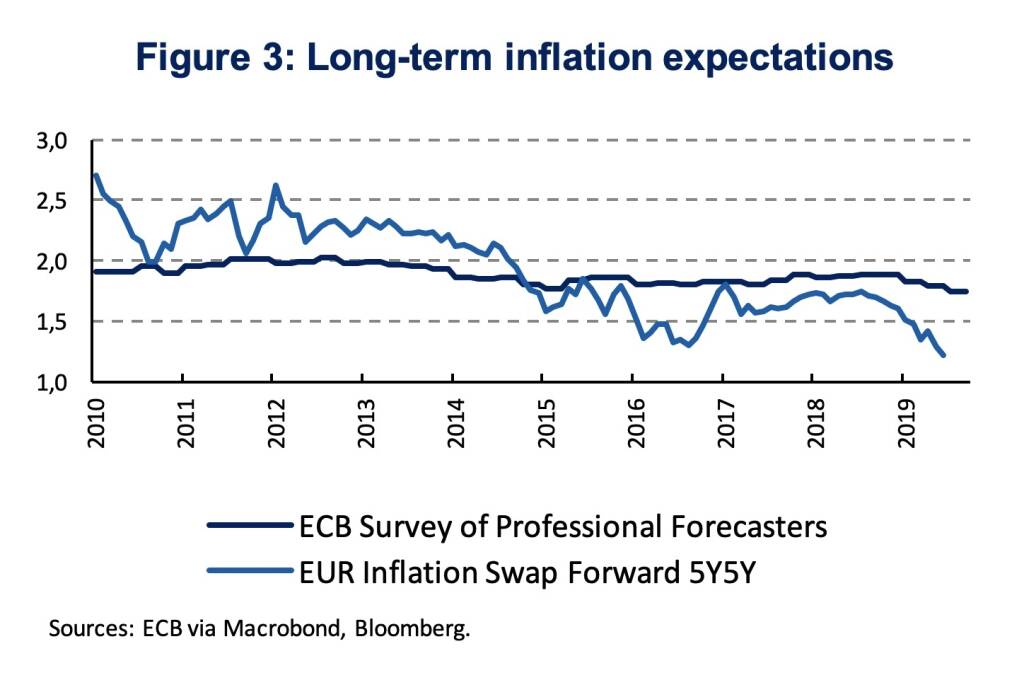 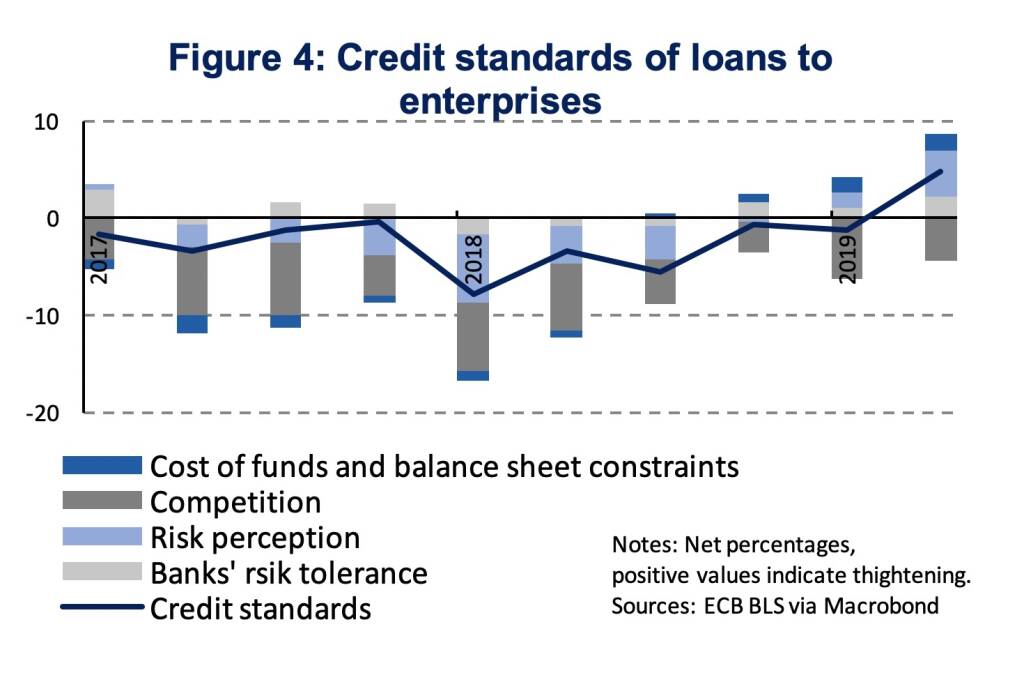 Credit standards of loans to enterprises