Countries with lower income per capita have higher growth prospects and a catch-up with richer countries implies a higher growth rate of insurance premiums. Important determinants of insurance development include income, wealth, the price of insurance, anticipated inflation, real interest rates, the role of the stock market, unemployment, demographic factors, risk aversion, the educational level, religion and culture, financial development, market structure, social security, the legal and regulatory environment and political risk and governance [1]. In more abstract terms, some of these factors are referred to as institutions or ultimate sources of growth. Bad institutions constrain convergence while good institutions enable long-term prosperity. In an ideal world we can abstract from these factors and ask how unconditional income and insurance convergence in transition economies in Central and Eastern Europe (CEE) would look like. In this research note, we estimate this potential for convergence.

In the standard economic growth model, the Cobb-Douglas production function has the form  where output (Y) depends on the factors of production capital (K), labor (L) and productivity (A) in period t and  is the capital share of income. This implies output per labor  where k is capital per labor. Further, we denote growth rates by g for the growth rate of productivity and n for population growth. It can be shown that economic growth evolves by (see image two above)

where  is the change in output in period t,  is the depreciation rate of capital and denotes the steady-state output. In the model, there are two sources of growth: the rate of technological progress, g, and “convergence”, given by the second term of the right-hand side of the equation.  The main assumption in the standard growth model are diminishing returns: Capital (machines, factories) catches up until it reaches a steady-state in which its marginal product (i. e. its return) equals the rate of depreciation. The convergence term says that the farther away output from its steady-state level the higher the speed of the catch-up process. Once an economy has reached its steady-state output level , the second term drops and the economy purely grows by technological progress. It is usually referred to as unconditional convergence as there are no constraints or barriers to convergence. It can also be thought of as a convergence potential of an economy.

We apply the above model to transition economies in CEE. Figure 1 shows the per capita gross domestic product (GDP) at purchasing power parities (PPP) relative to Germany; the technological frontier.

The GDP per capita level in 2018 relative to Germany gives a proxy for the starting level of  for each CEE economy in the model. Technological progress (g) is assumed to grow by 0.5 % per anno (average growth of German total factor productivity between 1990 and 2017 according to the Conference Board) and the German economy is assumed to keep growing at 0.5 % annually.  The constant n is proxied by the average %-change in the country-specific working-age population between 2018 and 2050 (United Nations Population Division, demographic projections, medium fertility). All countries exhibit average annual declines in the working-age populations ranging from -0.5 % (Montenegro) to -1.2 % (Bulgaria), which slow down the convergence process. The capital share of income  is set at 1/3 and the annual depreciation rate  is assumed at 5.0 %. The unconditional convergence process relative to German GDP per capita (PPP) is depicted in Figure 2.

In 2046, the Czech economy is the first to reach today’s income per capita in Germany and Ukraine is the last one to reach Germany’s living standards in 2077. Central Europe (Hungary, Poland, Czech Republic and Slovakia) is the first region to complete the catch-up process until 2053. Countries from the Western Balkan (Albania, North Macedonia, Bosnia & Hercegovina) starting with less than 1/3 of Germany’s living standards are among the catch-up laggards. 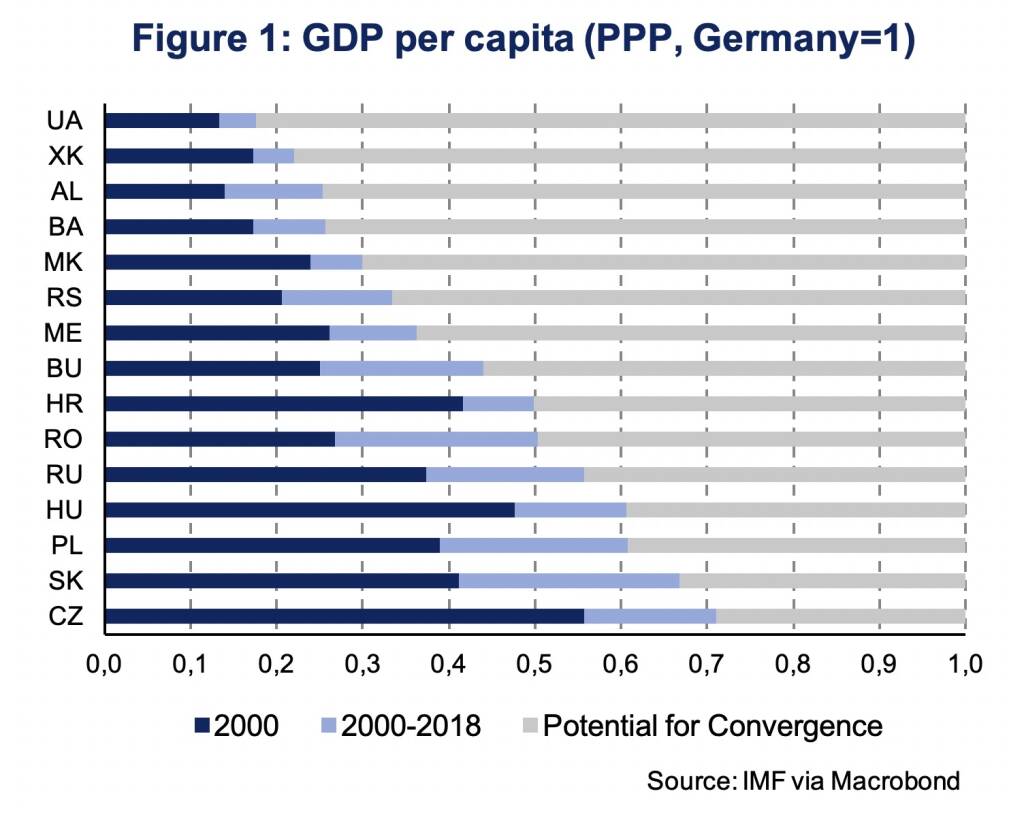 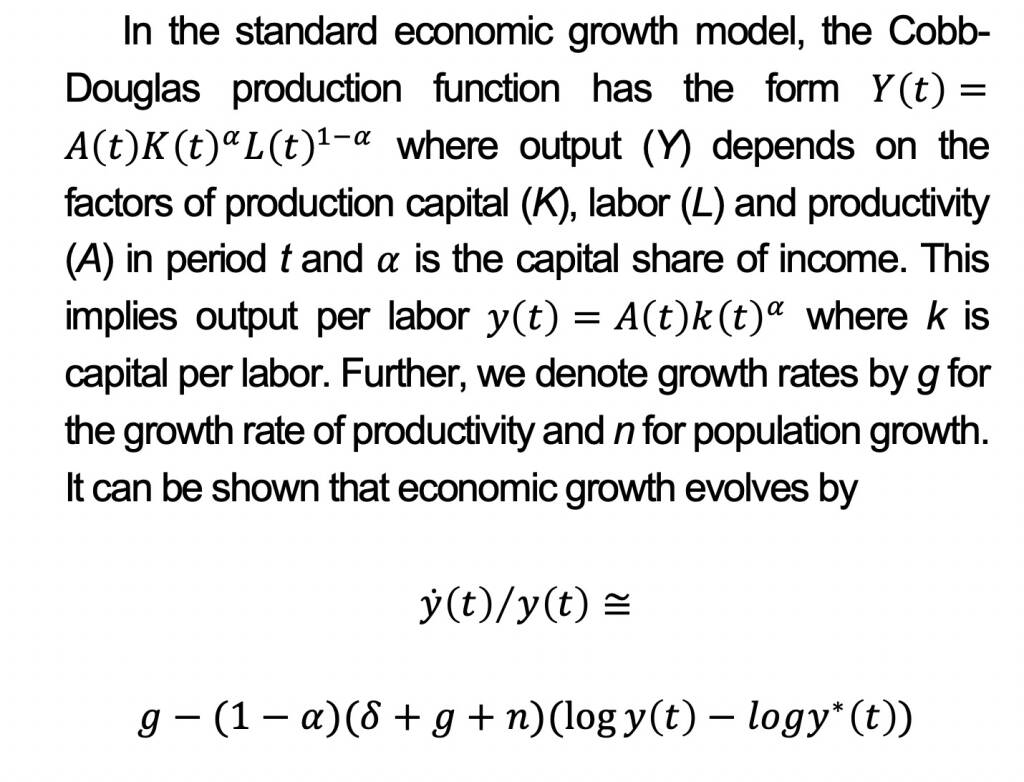 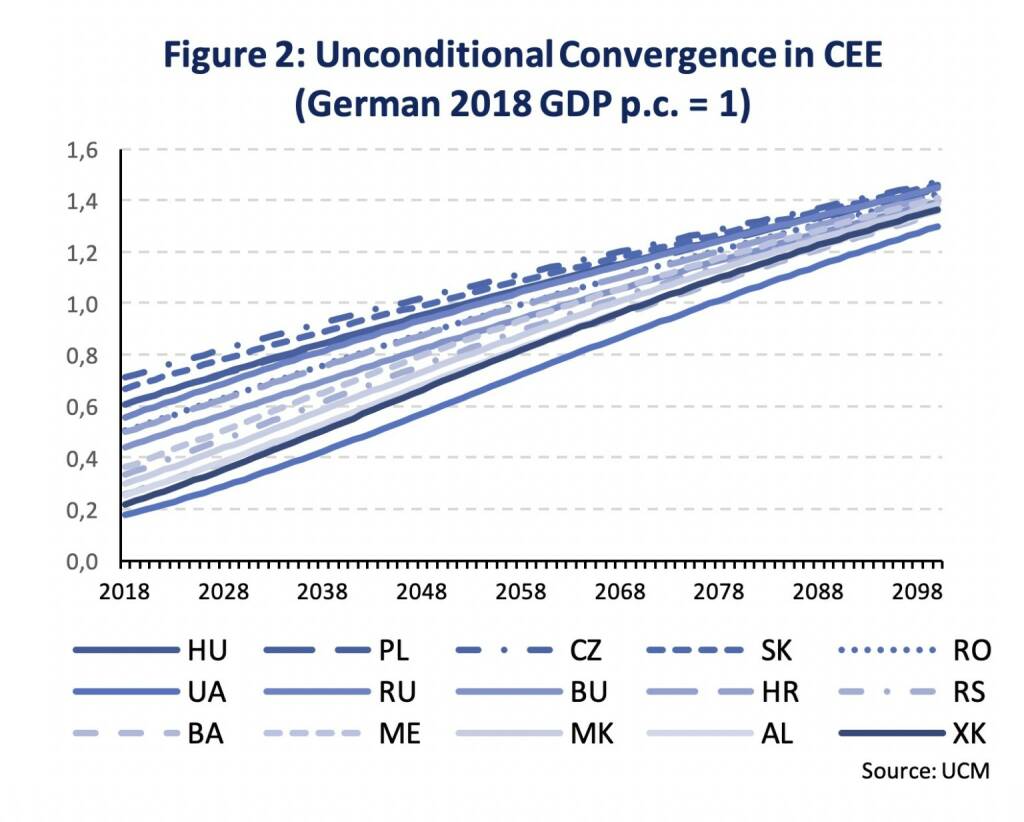