Central and Eastern Europe (CEE) maintains a solid expansion albeit a weakening external macroeconomic environment. The expansion of the global economy has slowed to 3.6 % in 2018 after 3.8 % in 2017 and the growth outlook for 2019 has further been lowered to 3.3 % (OECD, IMF). Business sentiment has deteriorated continuously throughout the year which can further be linked to elevated levels of political uncertainty. Trade tensions between the United States and China heightened and the future EU-UK relationship remains unclear. Among developed economies, the growth slow-down was markedly felt in the Euro Area. The European Central Bank (ECB) has revised its 2019 GDP growth projection downward since mid-2018 (Figure 1). The latest ECB staff macroeconomic projections from March indicate Euro Area GDP growth at 1.1 % in 2019. The preliminary estimate of first quarter GDP growth at 0.4 % (quarter-on-quarter, seasonally adjusted), which has been released at the end of April, shows a mild gain in economic momentum compared to the second half of 2018.

In spite of the region’s resilience, the economies of CEE remain closely integrated into Euro Area value chains. In the Czech Republic, for instance, 55 % of domestic gross value added in exports is exported to Euro Area countries, 24.4 % to Germany alone. Among the top 10 countries with the highest Euro Area export share, in gross valued added terms, are 6 countries located within the CEE region (Table 1). Hence, if the weakness of the Euro Area business cycle endures for longer, the region will not be immune to negative spill-overs.

So far negative effects from weaker external demand have been more than compensated by a boost in domestic demand. The structure of GDP growth in many CEE economies has increasingly shifted towards household consumption as well as investment activity. Net-exports, on the other hand, have subtracted from GDP growth in 2018, not in Montenegro and North Macedonia though (Figure 3).

The strong business cycle has ensured economic convergence to continue. CEE economies, particularly those which have already been part of the EU, have fueled European convergence prior to the Great Recession of 2008/09. After the crisis, convergence has continued, yet, at a slower pace. Since 2000 the average EU-CEE economy has close the GDP per capita gap to Germany by 20 %-age points. Poland, for instance, had a GDP per capita of 39 % the German level in 2000, compared to 61 % in 2018 (Figure 6). Countries at the Western Balkan were less successful. Ukraine has closed the gap to Germany by 4 %, even though starting at a much lower level (13 %) than Poland. This shows that there is no guarantee for convergence. Convergence is conditional on, so called, social capacities which are vital for technological progress to diffuse. The quality of national institutions as well as a labor force equipped with the necessary skills are among the best validated examples.

Looking ahead, the innovative capacity with respect to digital technologies and processes will be vital to converge. Comparing digital skills of the labor force (age 25-54) with a country’s rank of GDP per capita, gives a descriptive indication with respect to the potential of convergence based on digital technologies (Figure 7). The positive correlation shows that richer countries tend to have a labor force which is better equipped with digital skills. However, some countries, like Central European economies (Czech Republic, Hungary and Slovakia) have a well digitally skilled labor force relative to the level of income. Other economies, like Italy and Ireland, but also Romania and Bulgaria, have an ill-equipped labor force relative to their level of income. Hence, in order to reap the full benefits of digital technologies and to be able to adapt technologies from the frontier, the latter countries will have to increase the digital skills of the work force.

Economic resilience in CEE endures. While the global and Euro Area business cycles slow, the economic expansion remains surprisingly strong in CEE. The region shows a high degree of economic integration with the Euro Area, yet strong domestic demand more than compensates for the weakening external conditions. Improvements in labor markets have been broad based, and rising wages support household consumption as, so far, inflation has remained rather muted. The region’s strong growth performance drives economic convergence. For it to persist, digital capacities will be essential to close the gap to an evolving technological frontier. 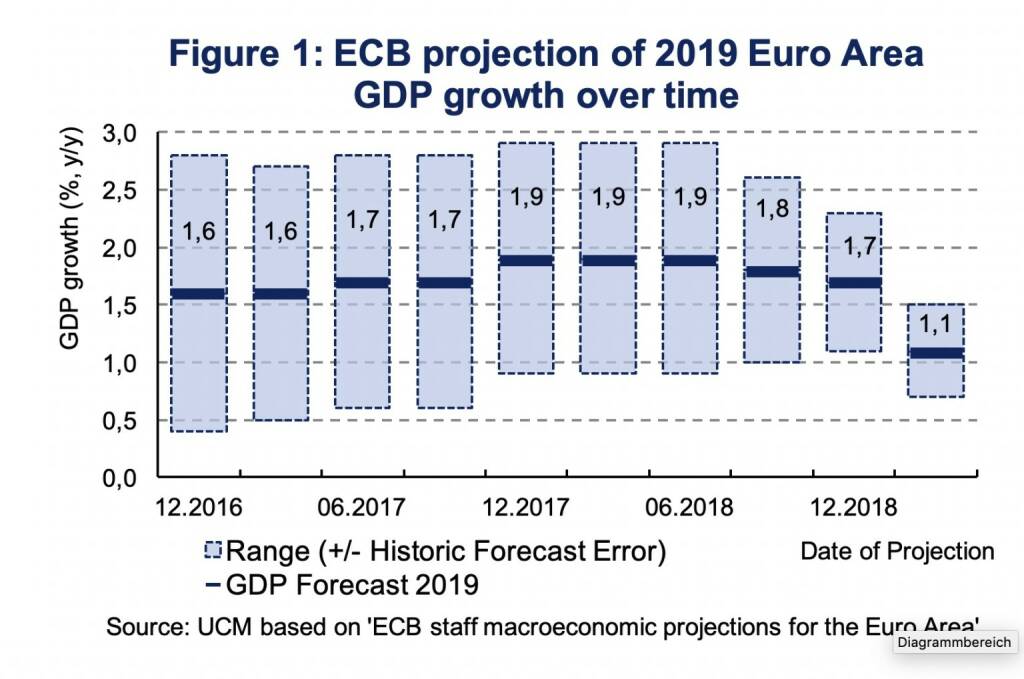 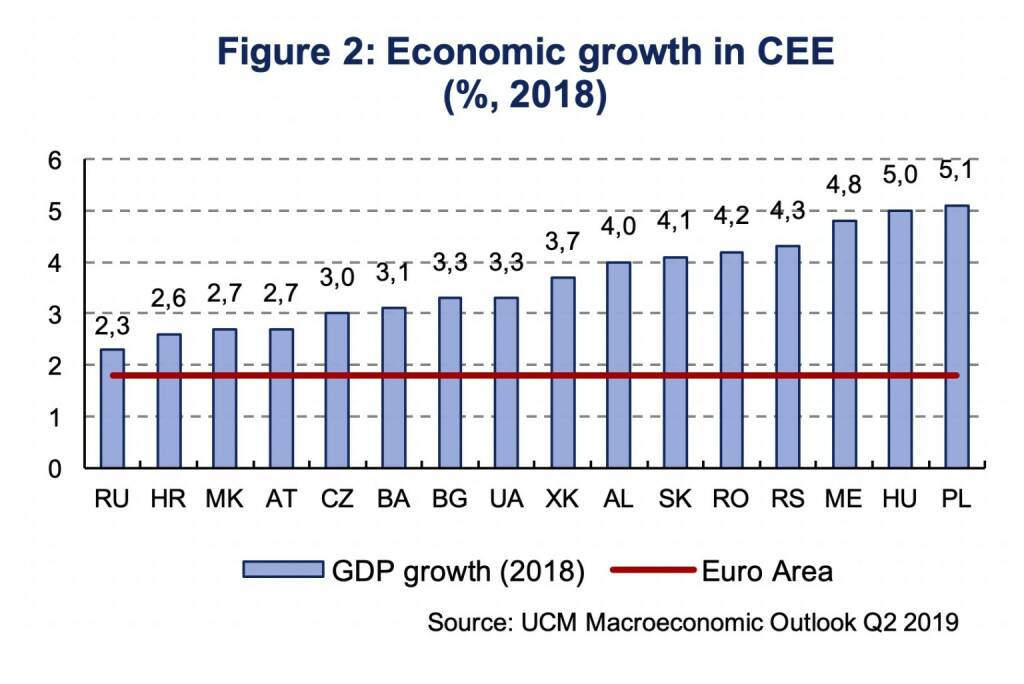 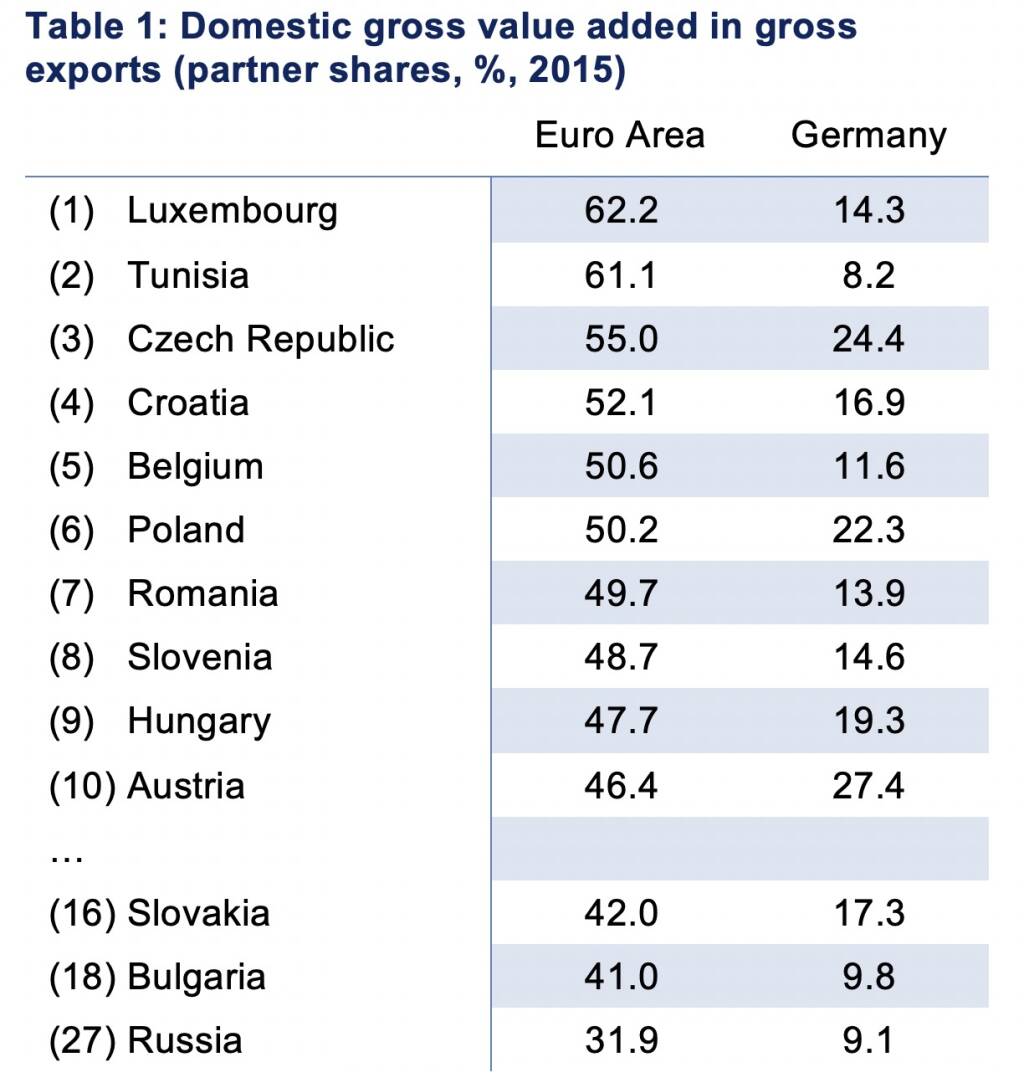 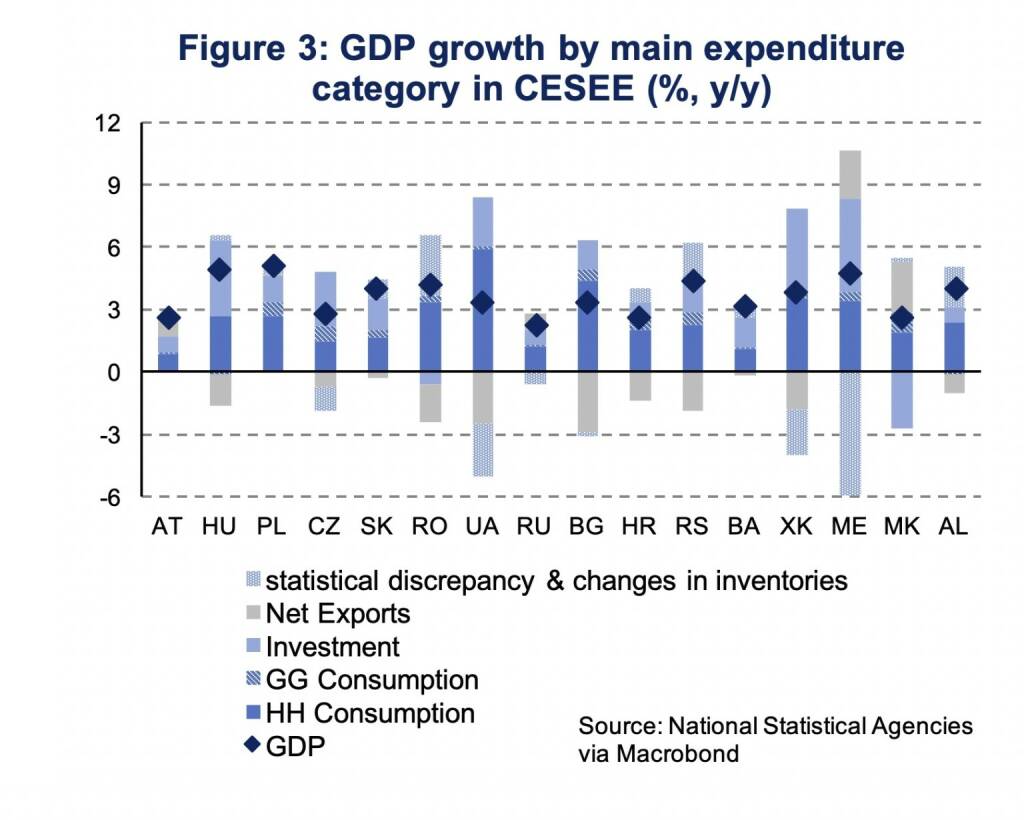 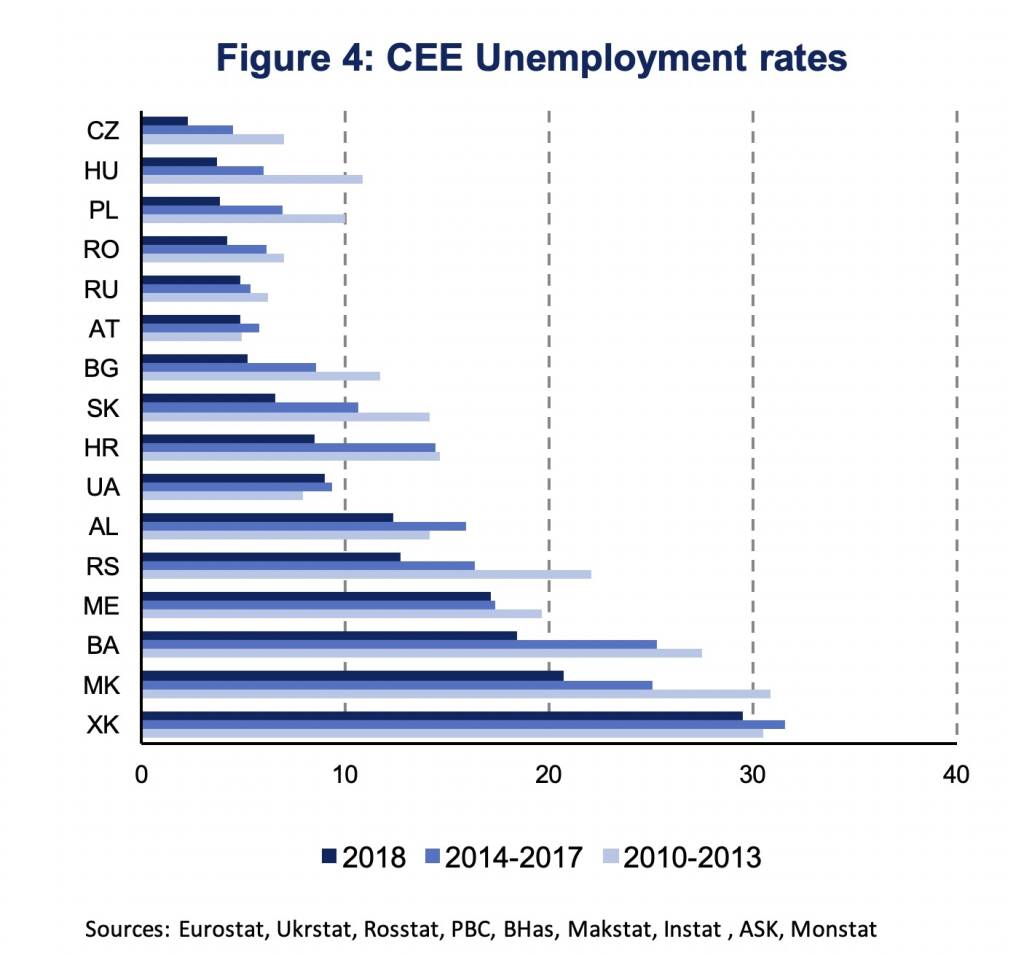 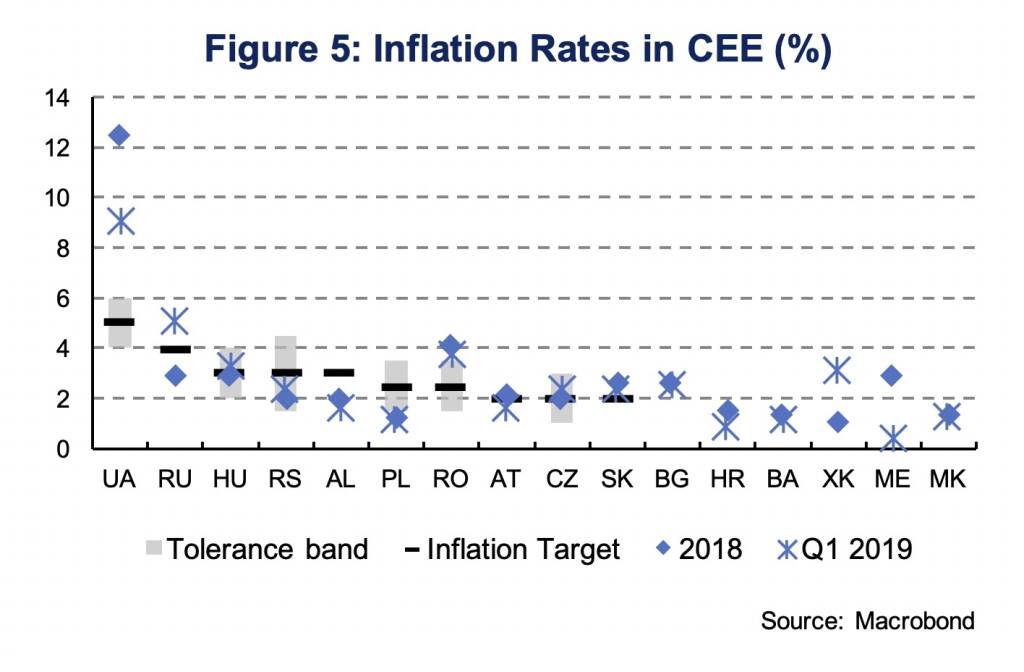 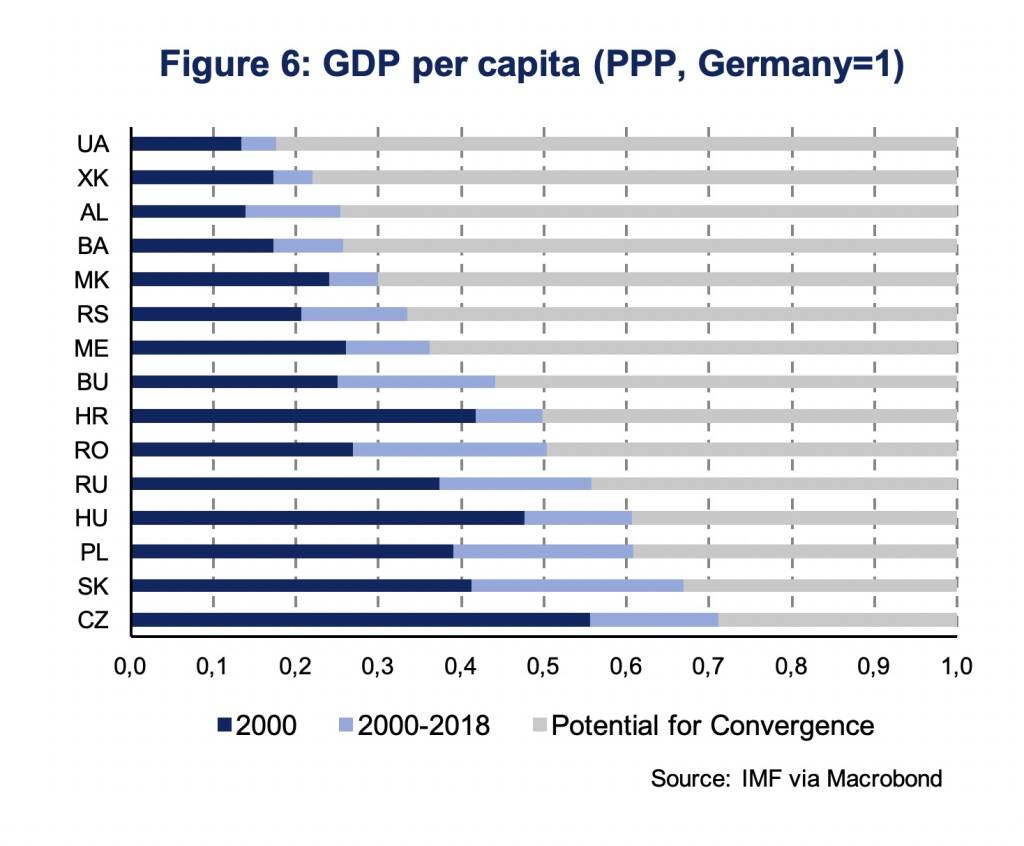