There were no expenditure details yet released by Destatis, however, it was noted in the press release that domestic demand contributed positively to quarter-on-quarter GDP growth and the development of foreign trade subtracted from GDP growth. Household consumption increased slightly and government final consumption expenditure was markedly up by year-end.  Gross fixed investment, especially in construction but also in machinery & equipment, increased markedly in Q4 2018, as noted by Destatis. During the last four quarters (Q4 2017-Q3 2018), gross fixed capital formation had massively contributed to GDP growth (0.9 %-age points on average), as can be seen in Figure 1. On the other side, new orders for manufacturing goods, which usually lead investment activity, slid during Q4 and, hence, dampen the investment prospects for the coming months (Figure 2). It has been argued that temporary factors held back growth during the second half of last year (changes in emissions standards in the automobile sector, low river water gauges), but even assuming a growth rebound in Q1, the German economy will hardly grow by more than 1.0 % in 2019.

Next, it might be interesting to see how public investment evolved in different sectors (machinery & equipment, construction in residential and non-residential buildings, other sectors) and at different levels of government (central, state and local) in Germany (Figure 5 and 6).

In Germany, economic growth slowed markedly during H2 2018. Quarterly GDP stagnated by year-end. External demand likely ceases as a growth driver with knock-on effects on domestic business investment. Germany’s public investment ratio is low compared to other Euro Area countries. A rise in real public investment has not induced a catch-up in the investment rate to the levels in France or Austria. On the other side, we also document the fall in public investment that occurred in Italy and Spain since the GCF. From a sectoral view, public investment in construction – both residential and non-residential – declined significantly since the 1990s. We also show the declining share of local investment in overall public investment. Roth and Wolf (2018) argue that public spending decreased in crucial sectors such as education (for example, school buildings at local government level), housing and defense [2]. The maintenance of the quality of the transport infrastructure has been part of an ongoing debate. A government programme aims to repair down-and-out bridges for expenditure of 9.3 billion EUR (0.3 % of GDP) until 2030. From a cyclical view, public investment is a foregone opportunity. Usually, public construction investment takes long lags to being build and fully unfold its positive effects on the economy. In the short term, it likely could not counter the cooling which is already underway but stabilize a deeper slowdown in the years ahead.

Even if the expenditure structure of GDP growth during the final quarter of the year has not yet been released, the trend of the first three quarters shows quite clearly that GDP growth in the region has predominantly been driven by domestic demand. Slovakia is the only country, where export growth (4.8 %, y/y) exceeded import growth (4.4 %). In Poland (5.7 % vs. 7.0 %), Hungary (5.3 % vs. 6.8 %), the Czech Republic (4.5 % vs. 5.8 %), Romania (6.1 % vs. 9.3 %) and Bulgaria (-1.5 % vs. 4.5 %) exports of goods and services expanded less rapidly than imports of goods and services. Net exports, thus, subtracted from GDP growth in all economies except for Slovakia. Strong growth in household consumption coupled with accelerated investment activity has fueled growth in the CEE region in 2018.

Strong domestic demand can further be linked to the resilience of the CEE region towards slower growth momentum in the Euro Area. The economies of the region are small and open and are, thus, exposed to their trading partner’s business cycles. Yet, economic spillovers are most substantially transmitted through exports and, though to a lesser extent, investment. The effect on consumption, which is currently the key growth drivers in CEE, is much weaker and less easily identified empirically. Based on a vector-autoregressive framework we empirically evaluate the response of CEE (CZ, HU, PL) GDP components to a shock in German GDP growth (Figure 8). The graphs display the response by consumption (CON, first row), investment (INV, second row) and exports (EXP, third row) to a one standard-deviation shock to German year-on-year GDP growth over the course of 20 quarters (horizontal axis). As one would expect, the most immediate response is identified for exports of goods and services (third row). The effect is of similar magnitude in all three CEE economies. The effect on investment (second row) is weaker, even not statistically significant in Hungary, and grows in magnitude until the third-to-fourth quarter. The effect on consumption (first row) is much weaker than on exports and investment and tends to be statistically indistinguishable from zero (except for Poland). The impulse-response functions also show that it takes longer until the effect can be seen in the GDP’s consumption component. This analysis suggests that the current structure of GDP growth in the CEE region makes them more resilient to slower growth in Germany. However, it also shows that the effect on investment as well as consumption, even though being smaller, takes up to a year to fully materialize. Hence, the growth of domestic demand in CEE might be dampened by the weakness of the German business cycle throughout the year 2019.

[1]Two weeks ago, we had argued in this publication, that the annual GDP estimate that was released by Destatis appears too high (UNIQA Capital Markets Weekly as of 4th February 2019).http://press-uniqagroup.com/News_Detail.aspx?id=79089&menueid=1686 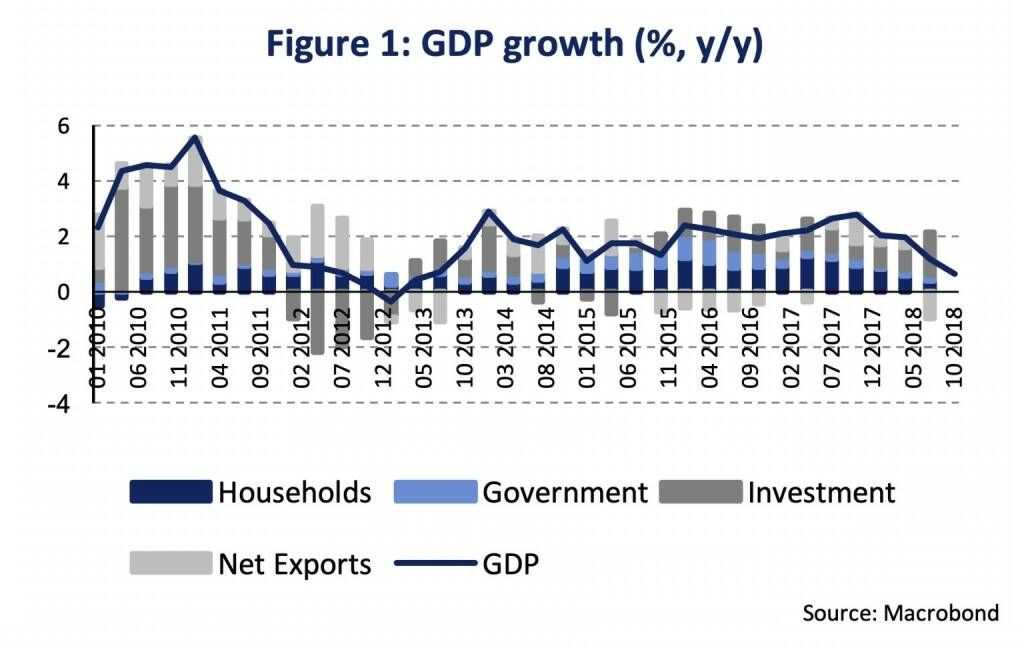 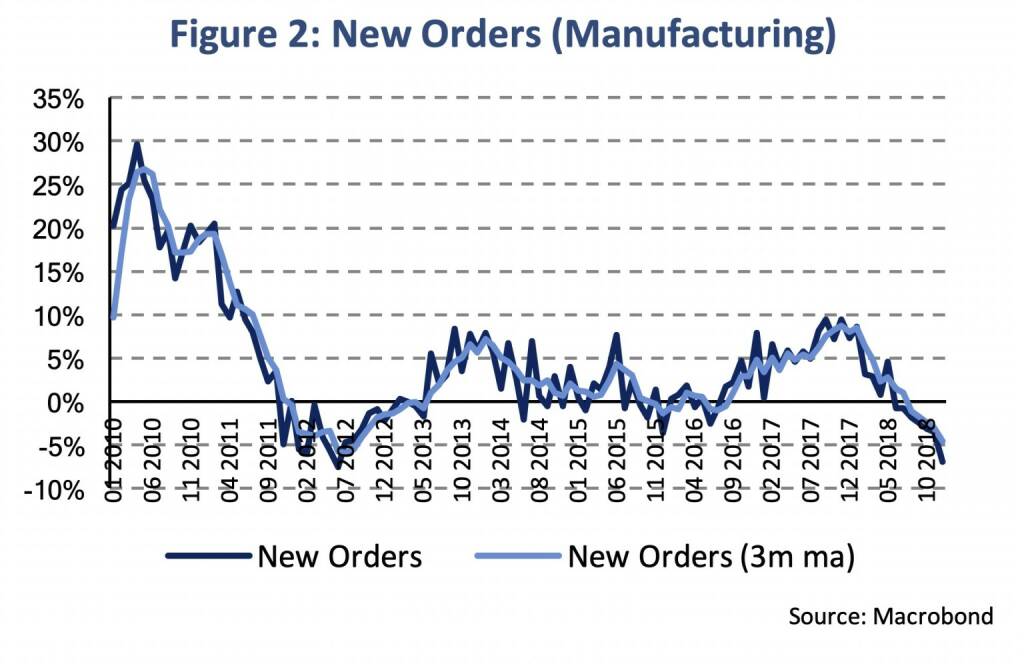 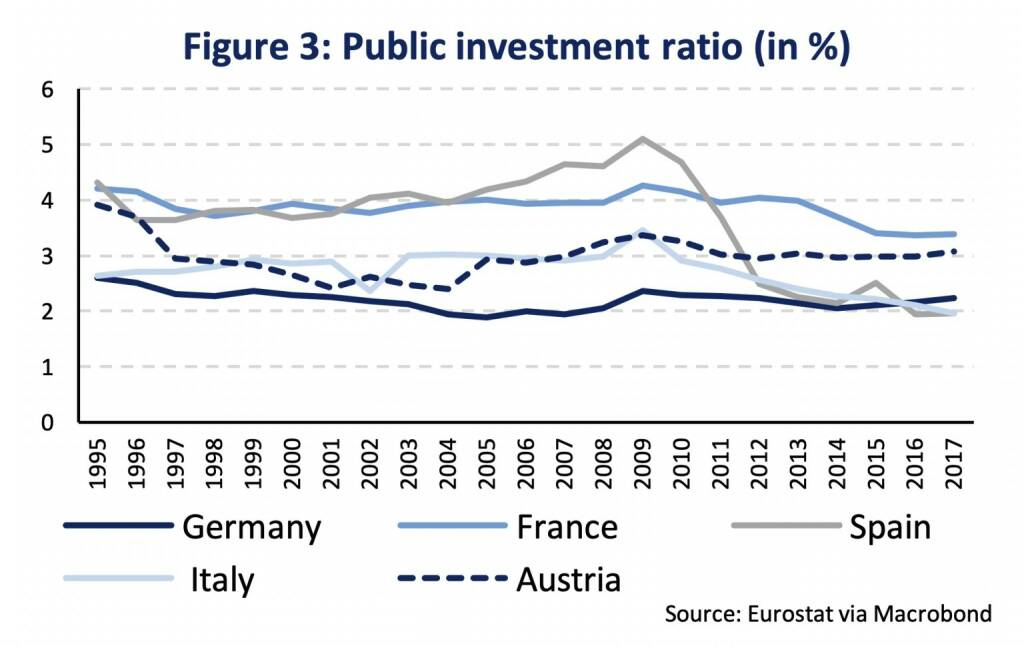 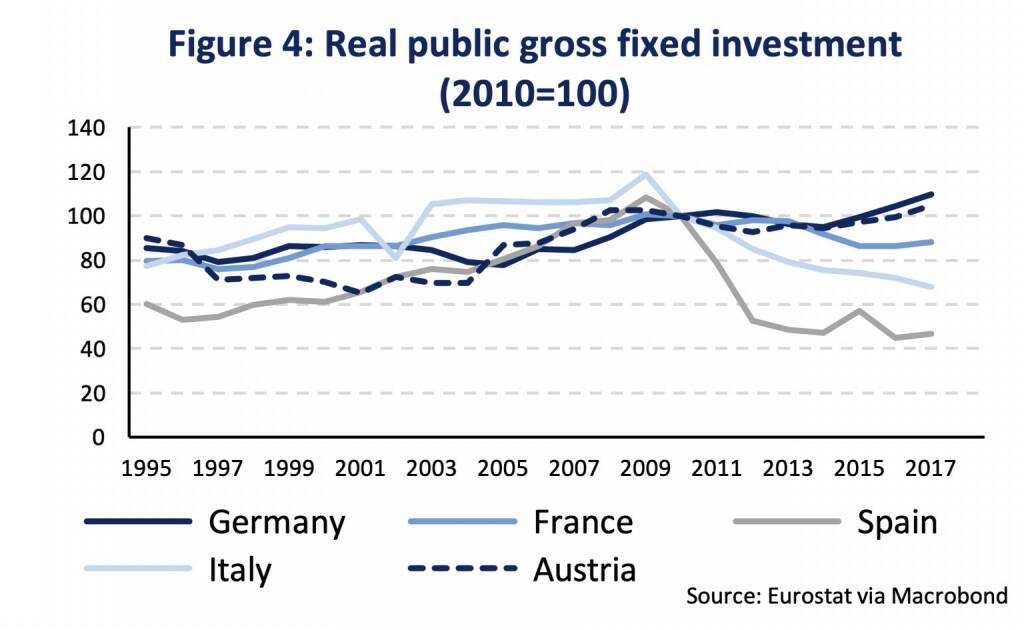 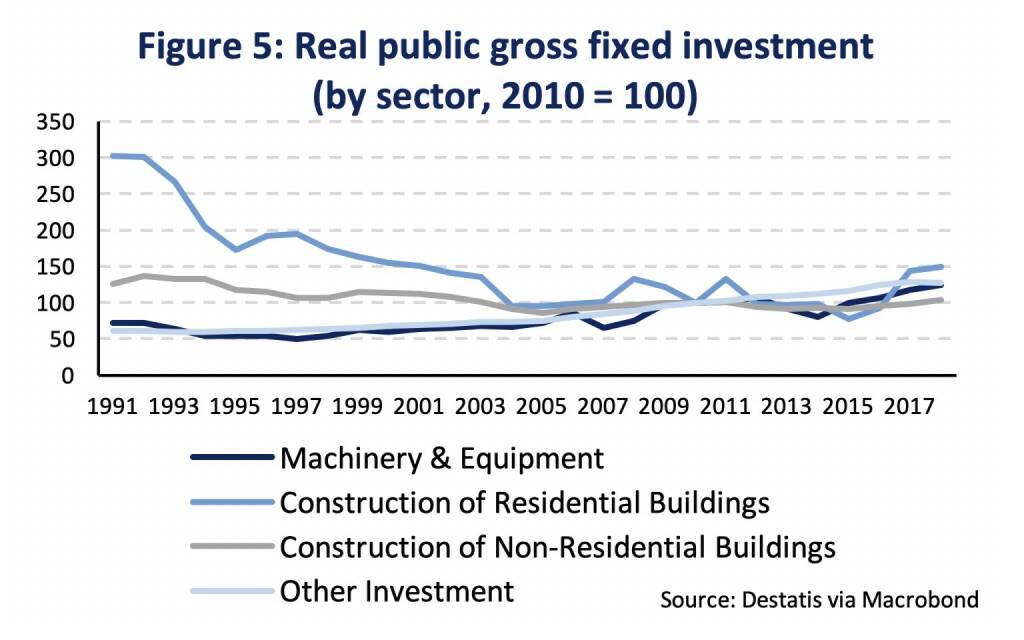 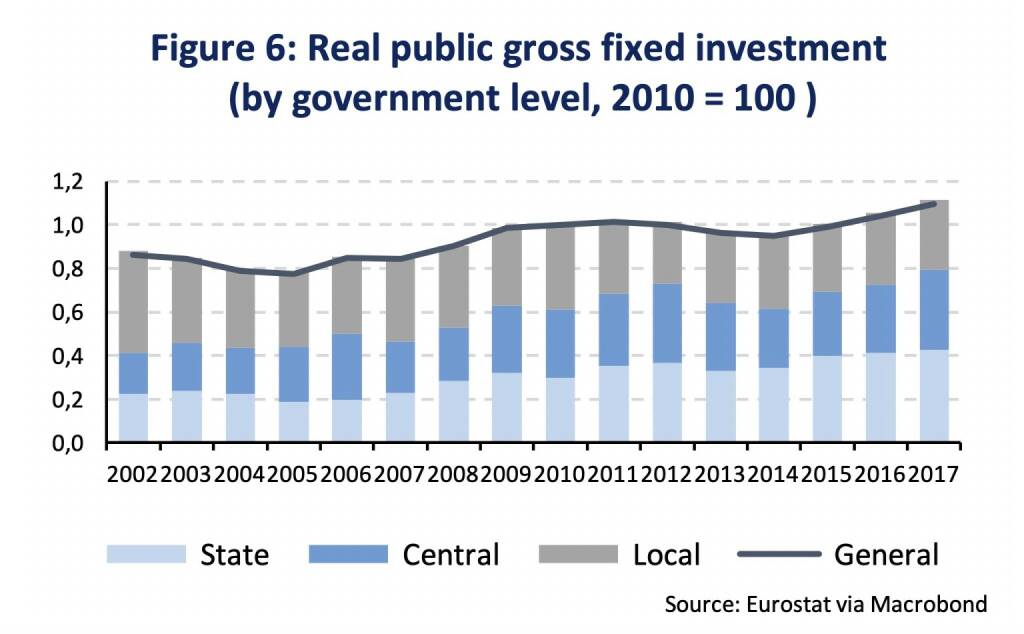 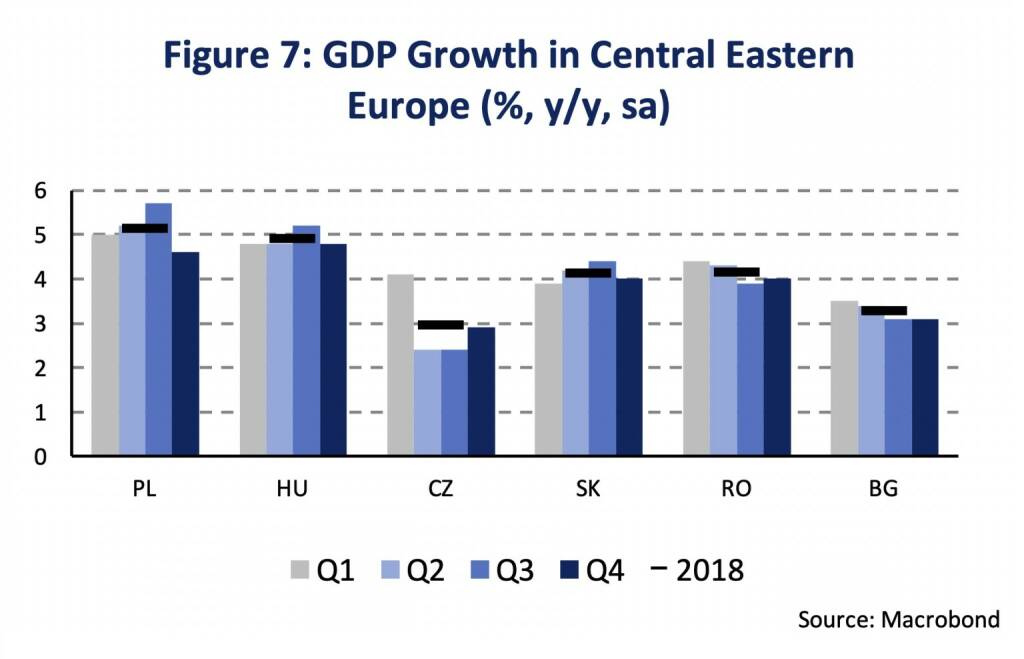 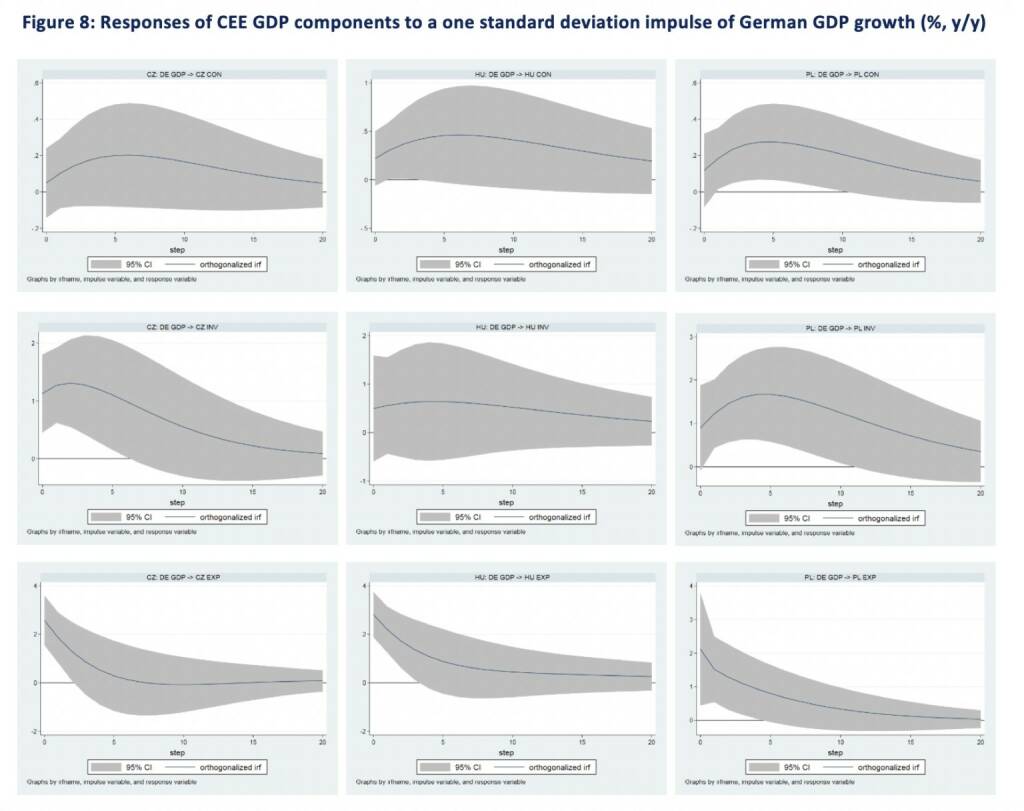